The photo section for the April 21 1925 edition of the Toronto Daily Star had this entry: 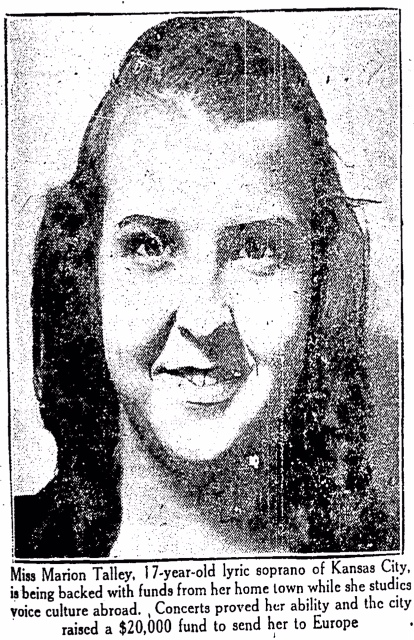 Wikipedia has an entry for Marion Talley: after using Kansas City money to study in New York and Italy, she was hired for the Metropolitan Opera in New York in 1925, becoming the youngest prima donna to sing there (this record was broken in 1943). Their general manager hoped that her debut would be low-key, but 200 leading Kansas City citizens, proud of their native daughter, arrived by special train, and a telegraph was set up backstage so that her father could send dispatches to the Associated Press. She also made her radio and film debuts in that year.

Unfortunately, it went downhill from there. Film critics panned her inexperience and claimed she was not photogenic. (You can decide for yourself – her Vitaphone short from 1927 is here.) She appeared in only seven more Metropolitan Opera productions before being let go in 1929. She eventually retired from show business, was married and divorced twice, and died in 1983.

The September 5 1947 edition of the Toronto Daily Star featured ads for a few entertainment options for people looking for a night on the town.

The first was for Lisa Derney at the St. Regis Hotel:

The St. Regis Hotel was located at 392 Sherbourne Street. It was in existence in 1960, but was gone by 1965. A high-rise building is now at that location. The name is about to be reused for a luxury downtown hotel.

The only reference I could find for Lisa Derney was this Arthur Murray Dance Studio ad, which appeared in some major magazines in 1949. Jimmy Amaro passed away in 2004; his obituary (at least, I assume it was him) appeared in the Windsor Star. I found a reference to a Jimmy Amaro Jr., who was a jazz bassist; I assume that he was Jimmy Sr.’s son.

The second ad was for The Great Athrens at the Eaton Auditorium (now the Carlu):

I could find nothing at all about The Great Athrens (or about the N. T. Advertiser, which claimed that he was better than Houdini).

And, finally, there was Earl Wild at Massey Hall:

Earl Wild (1915-2010) was a pianist who was best known for transcribing jazz and classical music into solo piano pieces. In 1997, he was the first pianist to stream live over the Internet.

The November 30 1951 edition of the Toronto Daily Star had an article about King George VI:

The King had been a heavy smoker and had understandably suffered a lot of stress due to the war. He was able to carry out some state duties, but his Christmas broadcast had to be recorded in sections. He passed away on February 6, 1952.

The first one was geared for more garden-variety use, as it was recommended by the “Medical Profession”: 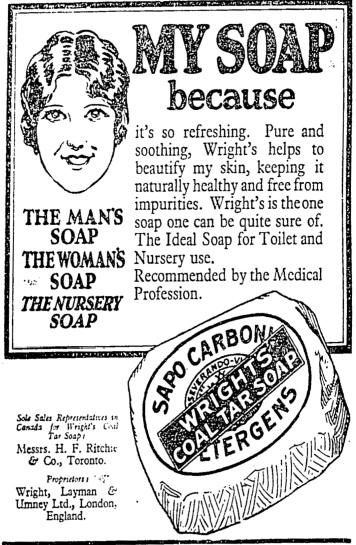 There is a Wikipedia page for Wright’s Coal Tar Soap. It was first manufactured in 1860, and was originally known as Sapo Carbonis Detergens (you can see that name on the label in the ad). The soap still exists, but no longer contains coal tar, as the European Union has banned its use in non-prescription products.

Ad #2 was for Lux Toilet Soap, and pitched it as a more upmarket product: 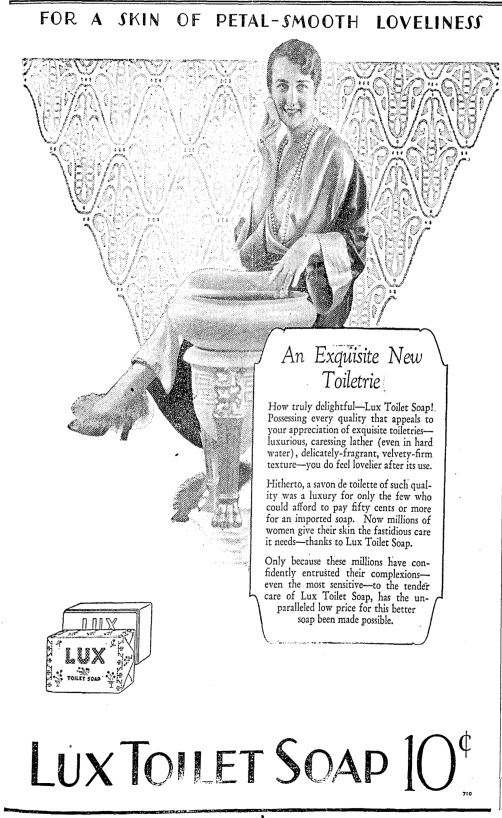 An exquisite new toiletrie! Lux soap was the first mass-market soap in the world, first offered for sale in 1925. It was created by Unilever, who still manufactures it.

The third and final ad was for people who wanted to keep their schoolgirl complexion: 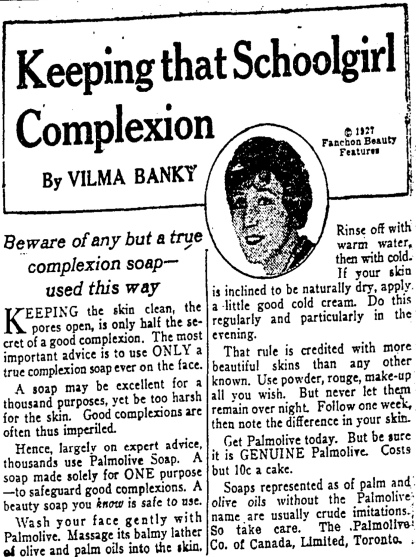 Palmolive is still around today, of course.

Vilma Bánky (1901-1991) was a Hungarian-born silent film actress who starred opposite Rudolph Valentino and Ronald Colman, among others. She left the business in the early 1930s after she married actor Rod La Rocque. Sadly, no one came to visit her in her final years, so she directed her lawyer to make no mention of her death, which was not announced until 1992.

One thing that I discovered when I started looking at old newspapers is that they used to include serialized stories, with a new episode every day or every week. 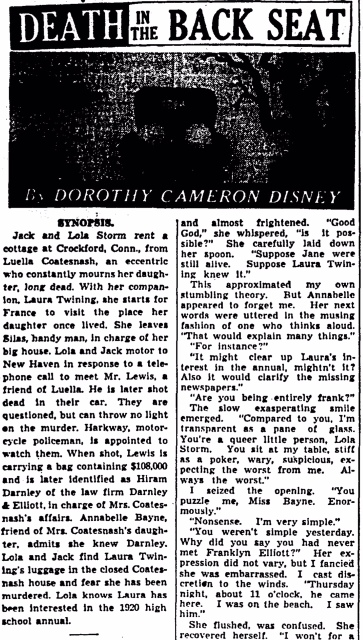 I love that this serial features the eccentric Luella Coatesnash.

Dorothy Cameron Disney (1903-1992), later known as Dorothy Disney MacKaye, started off as a mystery writer and then became a marriage advice columnist, writing “Can This Marriage Be Saved?” for the Ladies’ Home Journal. Death In The Back Seat was published in novel form in 1936.

Her Washington Post obituary is here. A review of her detective novels is here.

For the last few days, I’ve been posting articles from the July 10 1936 Toronto Daily Star. At the time, Edward VIII was in the middle of his brief reign as King of England, before abdicating in December. There were two items in the paper related to the King.

The portrait was specifically designed for framing!

The other article was a bit of filler that described a vote of censure on Richmond Hill school trustees:

The King’s birthday was on June 23, which would have been close to the end of school term. Perhaps the Richmond Hill school was scheduling final exams during that week.

The July 10 1936 edition of the Toronto Daily Star contained an article on Helen Stephens, an American athlete.

The article isn’t exactly flattering (and contains an unfortunate typo of “bed” instead of “bet”). The woman she was compared to, Babe Didrickson, was a gold-medal winner at the 1932 Olympics and became a successful professional golfer and to pitch in two major-league baseball spring training games.

Ms. Stephens, who was 18 at the time, went on to compete for the United States at the 1936 Olympic Games, winning the 100 metre dash and anchoring the women’s 4 x 100 metre relay team. She had to endure having to pass a “gender test” after being accused of not actually being a woman. After her race, she met Adolf Hitler, who apparently pinched her bottom.

She later owned a women’s semi-professional basketball team, and passed away in 1994.

Here’s a movie ad from the May 1 1954 edition of the Toronto Daily Star. Then, as now, movie ads followed a basic principle: sex sells.

A publicity photograph for the movie, later in the same edition, mislabelled it as “Rhadsody”:

Rotten Tomatoes was less than complimentary of this movie, giving it a so-so 59% rating. One reviewer’s comment: “Beautiful music, ravishing Elizabeth, pedestrian script.”

A while back, I looked up newspaper articles for June 8, 1960, as that was the day when I was born. When I looked at the front page for the Toronto Daily Star on that day, I discovered that actress Gina Lollobrigida had just moved to Toronto with her then-husband and their son. (She apparently moved to Toronto for tax reasons and for legal status for her husband.) I find this fascinatingly incongruous: on the one hand, you have an Italian film star; on the other hand, Toronto in 1960. There seems no way that they could possibly match up.

The front page showed a picture of Ms. Lollobrigida being greeted by Toronto mayor Nathan Phillips: 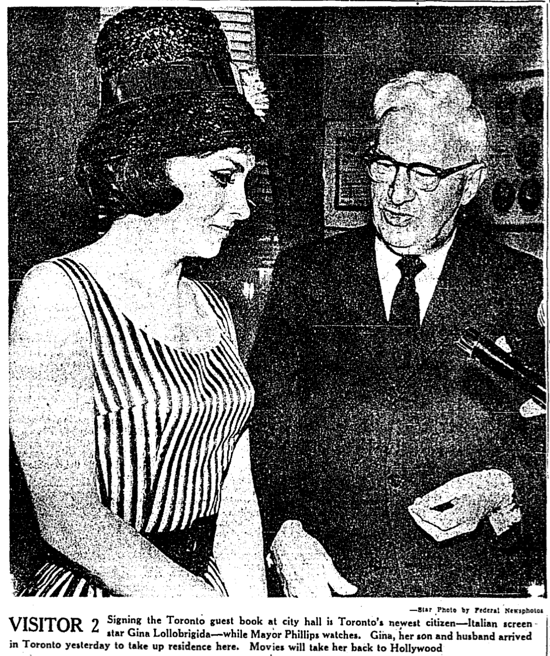 The mayor appears to be staring at Ms. Lollobrigida’s cleavage in this photo. (By the way, Visitor 1 was Prince Philip, who arrived in Toronto that day from Ottawa.)

The Daily Star polled readers as to whether altogether too much fuss was being made over her arrival, and the general consensus appears to have been yes:

Her new neighbours didn’t think so as they badgered her for an autograph:

I couldn’t find out when Ms. Lollobrigida left Toronto, but she and her husband divorced in 1971, so it was probably before then.

Her manager was her husband, Moe Snyder, who was aggressive and controlling; she divorced him in 1937, surrendering half her career earnings to him as a result. In 1938, Snyder, who didn’t like the idea of his ex-wife seeing another man, shot Etting’s new partner, pianist Myrl Alderman, and threatened to kill Etting and their daughter. Etting and Alderman later married, and remained together until his death in 1966.