Fans of the Hitchhiker’s Guide To The Galaxy series will recognize the name of the car in this ad from the October 5 1951 edition of the Toronto Daily Star:

As for Cedarvale Motors: a search of the Toronto city directories revealed that they changed owners several times. They were at 1463 Eglinton West in 1956 and 1961, and they do not appear in the 1963 directory.

Here’s an ad for Lux soap from the May 23 1951 edition of the Toronto Daily Star, featuring a young Elizabeth Taylor:

Father’s Little Dividend (1951) was the sequel to Father Of The Bride, a successful and critically acclaimed film released in 1950. The sequel was almost equally successful.

Father’s Little Dividend is now in the public domain, as MGM did not renew the copyright on it in 1979. There are several copies of the movie on YouTube; here’s one.

Here’s part of an article from the May 23 1951 edition of the Toronto Daily Star, outlining what was to appear in that weekend’s Star Weekly issue. Unfortunately, parts of the article are garbled. 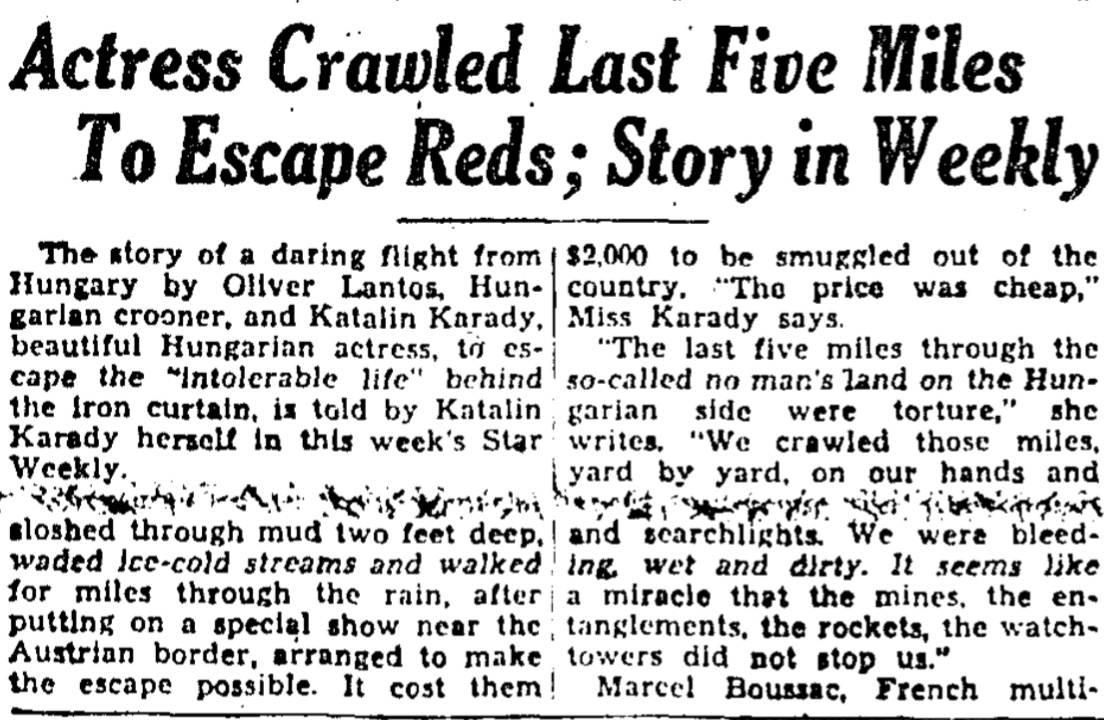 Katalin Karády (1910-1990) lived in interesting times (to paraphrase the old Scottish curse). Crawling five miles to escape Communism was by no means the toughest ordeal that she had to endure:

After escaping Hungary in 1951, Ms. Karády lived briefly in Austria, Switzerland, and Belgium before relocating to São Paulo, Brazil, in 1953, where she opened a fashion shop. In 1968, she moved to New York City. When invited to return to Hungary in 1980 to commemorate her 70th birthday, she sent a hat in her place.

In the summer of 1951, rainfall was unevenly distributed in western Canada. Evidence for this can be found in the July 18 1951 edition of the Globe and Mail.

In Calgary, there was flooding:

Vancouver and Victoria had the opposite problem: Vancouver had gone 41 days without rain, and Victoria 38 days. Vancouver tried seeding clouds with dry ice, which didn’t work, so Victoria hired a man with an electrical device:

I looked up Environment Canada’s weather records for 1951, and they show that there was no significant rain in Victoria until August 27, when 19.6 mm of rain fell. September was also unusually dry until two significant rainfalls on September 27 and 29.

But Calgary had gone completely without rain on only three of the first 18 days of July 1951 – there were five days with a trace of rain, and 10 days of measurable rainfall. It got a little better for Calgarians in the rest of the month, but there were two other large rainfall days, on the 24th and the 29th. August 1951 was even worse: it rained heavily (10 mm or more) in six of the last 10 days of the month. By the end of the summer, travel by canoe might have seemed like an attractive option.

The July 18 1951 edition of the Toronto Globe and Mail contained an article about a woman who hoped to be the first Canadian to swim the English Channel:

As it turned out, she didn’t have to worry about raising money to make her way home. Mrs. Morris Leuszler (as the Globe and Mail referred to her) made her attempt on August 16, and was successful – she became the first Canadian to swim the channel. Her time was 13 hours, 25 minutes, which beat the women’s record of 13:42. (The current record holder is Trent Grimsey of Australia, who crossed the channel in 6 hours and 55 minutes. The current female record holder is Yvetta Hlaváčová, who made it across in 7:25.)

Wikipedia has an entry on Winnie Leuszler (1926-2004); she had a number of achievements and honours in her life. She was honoured as Canada’s All Round Athlete of the year in 1946, when she won the five-mile World Swimming Championship while three months pregnant. In addition to her achievements in distance swimming, she became Canada’s first female baseball umpire in 1957. She received the Order of Ontario in 1999.

The January 23 1951 edition of the Toronto Daily Star contained this ad for Dr. Chase’s Nerve Food, in which they offered to send $10.00 to anyone who bought it and didn’t feel better afterwards.

So, suppose that you’ve picked up $10.00 from the Dr. Chase Medicine Co. Ltd., and you’re not sure what to do with it. One option, in an ad on the same page of the paper, was to recement your furnace:

Another option was to buy a pair of glasses and pocket $0.50 in change:

King Optical existed into at least the mid-1960s. In 1965, they had a branch near Yonge and Dundas (at 276 1/2 Yonge Street), and a branch in Scarborough. I’m not sure when they ceased to exist.

The January 23 1951 edition of the Toronto Daily Star contained this legal notice about a name change: 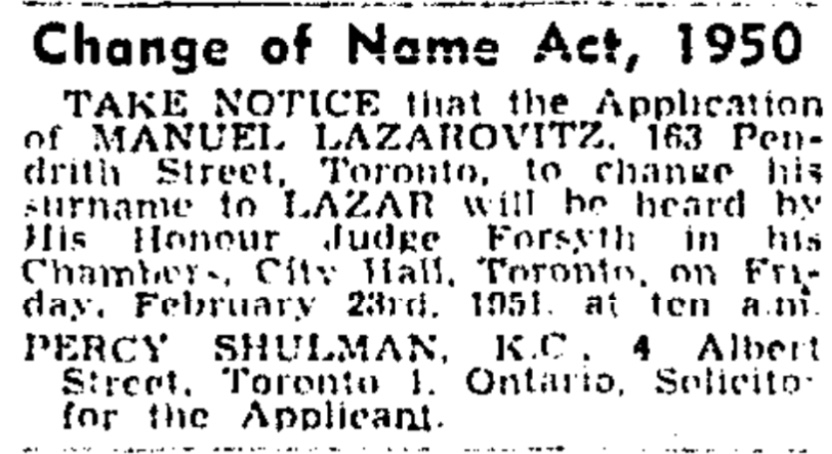 I was curious: did Mr. Lazarovitz’s name change go through? I was hoping that the Toronto city directories would answer that question, but unfortunately they are mysteriously silent. There is no Manuel Lazarovitz or Manuel Lazar in any of the 1950, 1951, 1952, and 1953 city directories, and he does not appear at 163 Pendrith Street in any of them.

I looked up Pendrith Street, and it appears to have been a predominately Jewish neighbourhood at that time. So my guess is that Mr. Lazarovitz was from out of town and was staying with a friend while he got his legal matter sorted out. I hope that he became Mr. Lazar and had a good life with his new name.

The January 23 1951 edition of the Toronto Daily Star featured this ad:

I’m not sure why the ad cropped Mr. Dickens’ head so that it looks disembodied – that just looks weird.

Doles Dickens (1916-1972) was a jazz musician and bandleader based mostly in New York. When not touring, he was a session musician for many famous recording artists of the 1950s, including Bill Haley, Mahalia Jackson, and LaVern Baker.

YouTube includes a few songs of his, including Rock And Roll (1949), which is a cover of an earlier version by Wild Bill Moore. Some people consider this to be the first rock and roll song ever – I think that the evolution was too gradual to name one song as the first, but Moore’s version reminds me a lot of early Bill Haley and the Comets.

Here’s an ad for an evening of entertainment at the Prince George Hotel, featured in the Toronto Daily Star on November 30, 1951: 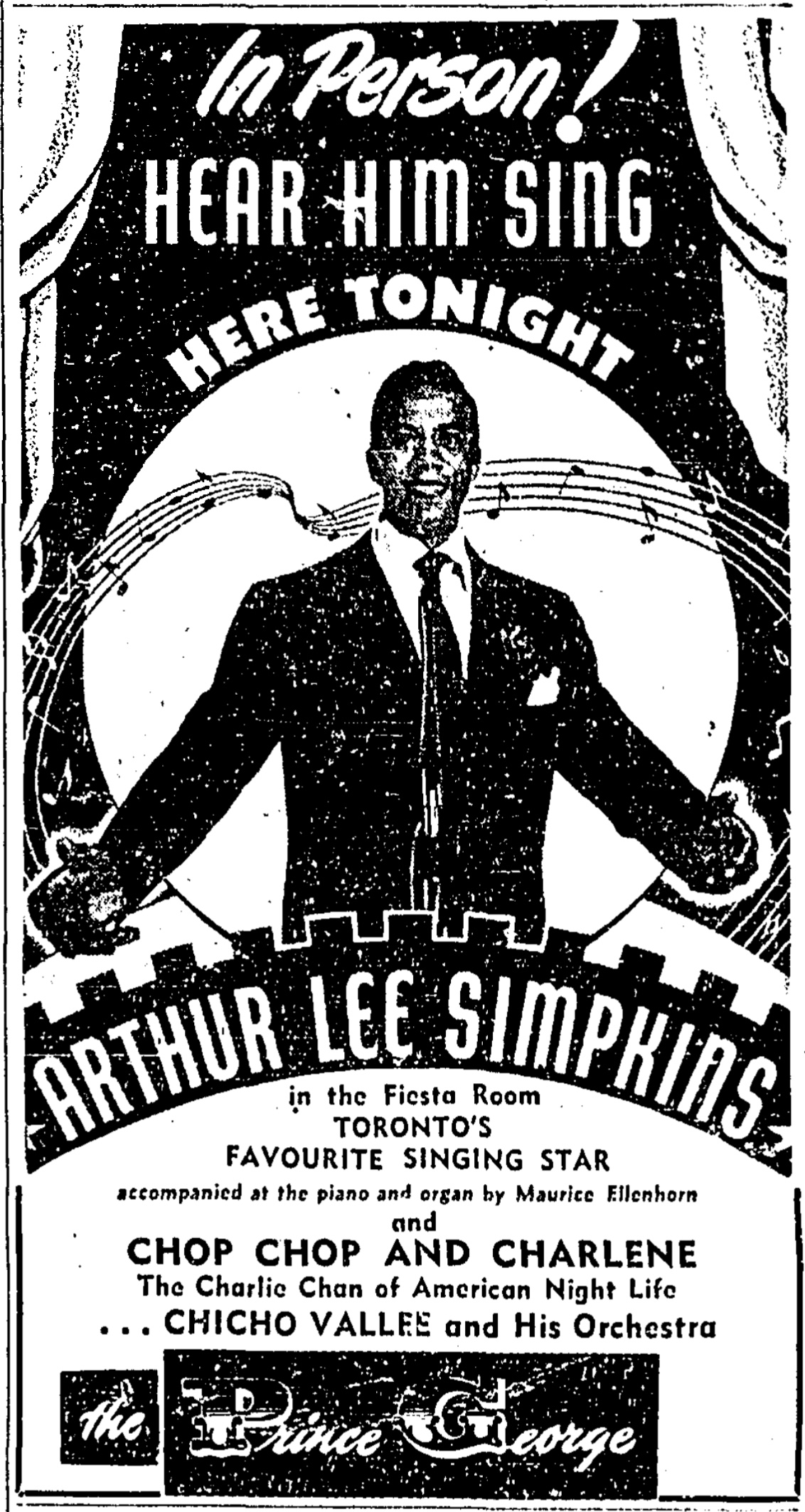 The Prince George was one of the oldest hotels in Toronto. Originally known as the Rossin House Hotel, it was renamed in 1909. It was torn down in 1969 when the Toronto-Dominion Centre was built.

YouTube has footage of Arthur Lee Simpkins singing on the television show You Asked For It in 1951 (I love footage from old TV shows). His voice apparently had tremendous range – based on what I heard, he certainly could hit the high notes!

“Chop Chop” was the stage name of an Australian magician named Al Wheatley (1901-1964). Charlene was his wife. Here is a picture of them.

The November 30 1951 edition of the Toronto Daily Star had an article about King George VI:

The King had been a heavy smoker and had understandably suffered a lot of stress due to the war. He was able to carry out some state duties, but his Christmas broadcast had to be recorded in sections. He passed away on February 6, 1952.