Here’s a brief article from the April 15 1947 edition of the Toronto Daily Star about a British diplomat who lost his potential posting because of matrimonial difficulties.

Mr. Bentinck was ambassador to Poland from 1945 to 1947; before that, he was the Chairman of the Joint Intelligence Committee during the Second World War. While chairman, he received reports of the annihilation of the Jews but refused to believe them.

As for his alleged matrimonial hijinks: the article above and his Wikipedia page have different viewpoints. The article seems to be a bit anti-Bentinck, whereas the Wikipedia page doesn’t mention his alleged adultery and reports that he found out that his wife and children had left him when his Hungarian maid phoned him and told him. I have no idea which version of the facts is correct.

Here’s another publicity photo from the April 15 1947 edition of the Toronto Daily Star:

Janis Paige belongs on the list of actors whom you do not blame for taking a stage name, as she was born Donna Mae Tjaden. She started her career singing at the Hollywood Canteen during the Second World War, during which the pilots of the Northrup B-61 Black Widow nicknamed her “The Black Widow Girl”. After the war, she embarked on a long career in movies, theatre, and television; her last TV role was in 2001. She’s still alive – she turns 99 in September.

Ted North Jr. (1916-1975) wasn’t really a newcomer at the time of this photo, as he had been in films since 1940. He had just finished working on The Unsuspected (1947), in which he was billed as “Michael North”; it was his last film. He later worked as an agent for Red Skelton, among others.

Here’s a publicity photo from the April 15 1947 edition of the Toronto Daily Star:

Audrey Young (1922-2012) sang with Tommy Dorsey’s orchestra and then appeared in a number of films in the 1940s, mostly in small parts. She married director/screenwriter/producer Billy Wilder in 1949; they remained married until he passed away in 2002.

The Ritz Brothers were a trio of precision dancers, singers, and comedians who started in vaudeville in the 1920s and starred in a number of films in the 1930s. Jimmy Ritz (1904-1985) was the middle brother of the trio.

I’ve been spending the last little while in the 1920s and 1930s, but the next few days will be in 1947! The photo page from the April 15 1947 edition of the Toronto Daily Star included some pictures of celebrities, including this photo of actress Martha Stewart:

She was married three times; her third marriage, to David Shelley, lasted from 1955 until he died in 1982. She was a widow for nearly forty years, passing away in February of this year.

The January 16 1947 edition of the Toronto Daily Star contained this pair of photographs of former film star Lilian Harvey: 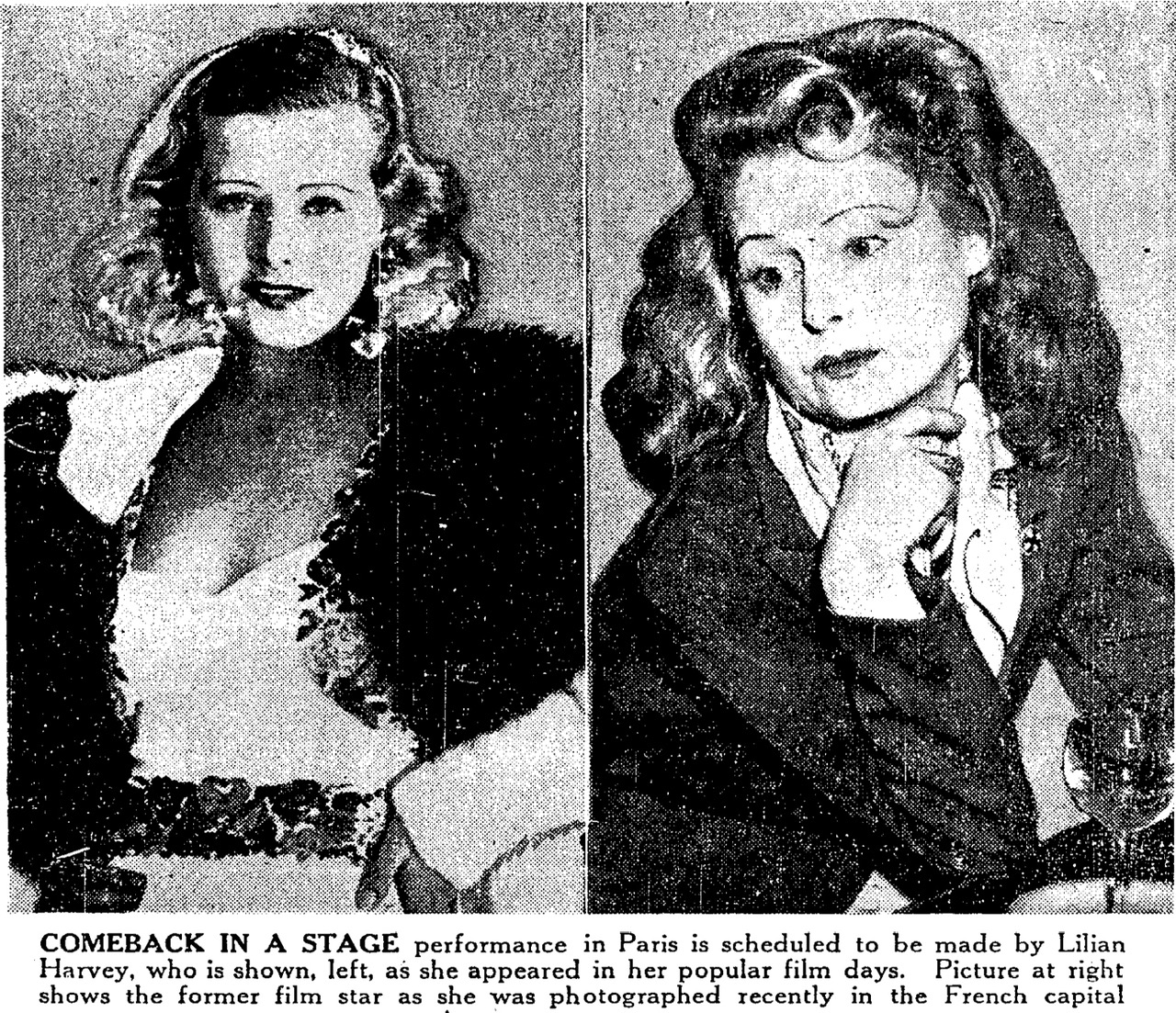 The story of Lilian Harvey (1906-1968) turns out to be quite interesting and a little sad. Daughter of a German father and an English mother, Ms. Harvey began her career in Berlin, and starred in a number of silent and talking films in Germany in the 1920s and 1930s. Because she had Jewish and gay colleagues, she was watched closely by the Gestapo; she eventually fled Germany in 1939, leaving behind a fortune in real estate, which was confiscated. She moved to Vichy France, but fled to the U.S. in 1942 when the Germans overran France.

After the war, she returned to Paris, where she was photographed in the newer photo above. Her Wikipedia page doesn’t include a lot of information about her post-war career, which suggests that her comeback might not have been as successful as hoped. She eventually moved to the French Riviera, opened a souvenir shop, and raised edible snails. And why not? (The French term for edible snails, “escargot”, sounds more yummy.)

The December 11 1947 edition of the Toronto Daily Star reported that the borough of East York was close to achieving the goal of no traffic deaths in the year. 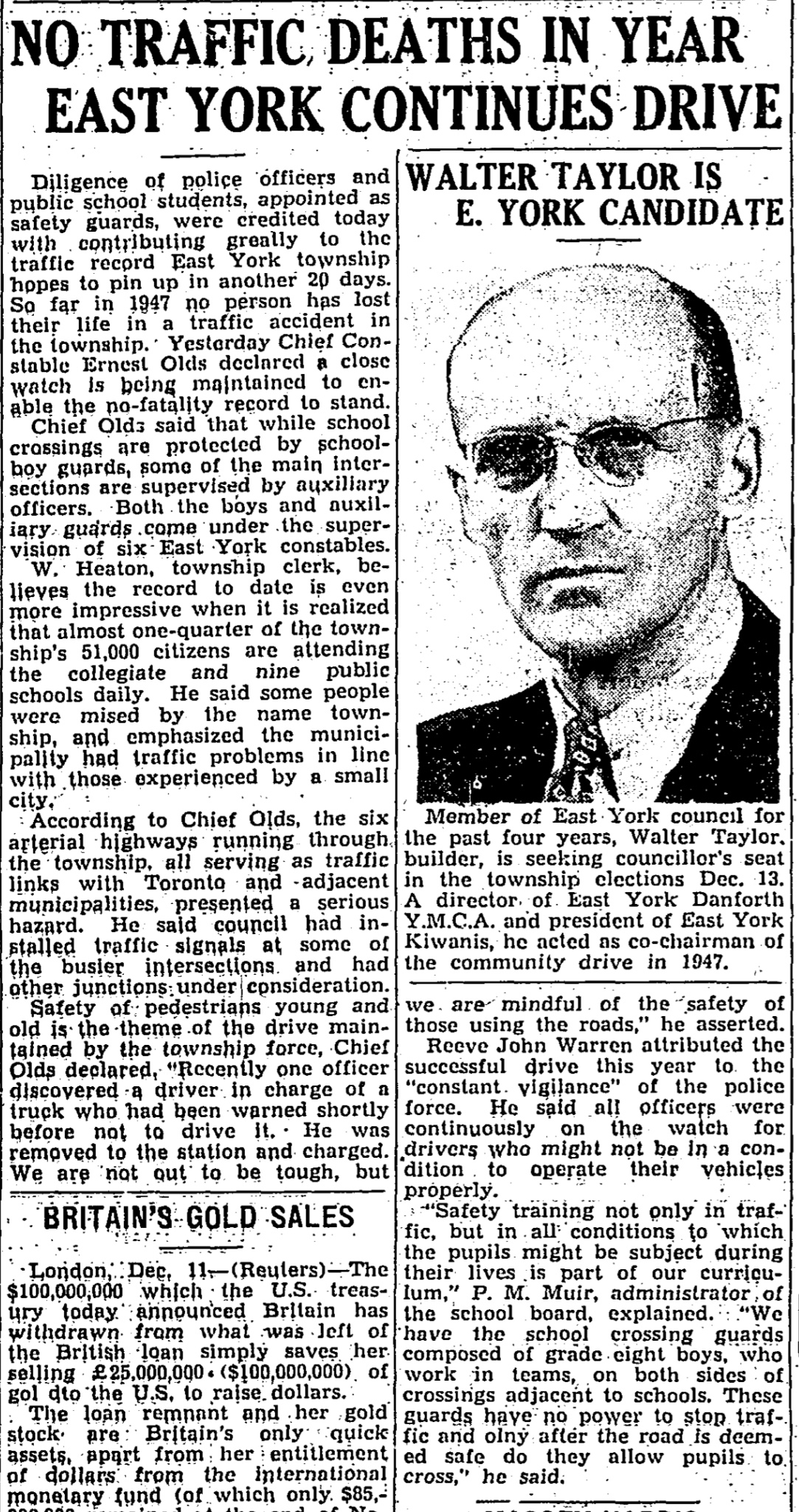 Admittedly, there were fewer people living in East York in 1947 than there are now. Still, that is an impressive achievement.

The December 11 1947 edition of the Toronto Daily Star had a brief article on a man who was going into taverns and pretending to be Tom Longboat, a famous Canadian runner:

Sadly, Tom Longboat was not alive for very long after this article appeared: he passed away from pneumonia in January, 1949.

Oddly enough, this wasn’t the first time that Longboat had been plagued by an impersonator. In 1917, a man named Edgar Laplante travelled around America giving concerts and pretending to be him, and then enlisted in the U.S. Army Transport Service under Longboat’s name. When the fake Longboat was killed in action, newspaper stories reported his death. His wife believed them, and remarried in 1918; when the real Longboat returned, she preferred to remain married to her new husband. Undaunted, Longboat remarried and had four children.

For many years, the Toronto Daily Star published a collection of odds and sods on its editorial page, entitled “A Little Of Everything”. This collection always led off with a daily poem; the poems are of varying quality.

I picked this one (which seems a bit more on the doggerel side to me) because the author’s name and address was posted, which enabled me to try to trace her in the Toronto city directories. The 1947 directory lists Arthur Sutherland at 425 Glencairn (the directory, a bastion of sexism, only listed the husband at a particular residence). He was the secretary-treasurer of the Blachford Shoe Manufacturing Company Limited, which is as good a thing to be as any. Moving forward:

Here’s a brief note about the royal family from the December 11 1947 edition of the Toronto Daily Star:

It’s been 72 years since this article, and both Prince Philip and (now) Queen Elizabeth are still living. I wonder if Philip still gets his allowance increased to $100,000 if she passes away before he does?

So far, I’ve found two ads in 1947 newspapers for products that claim to help some women, but not all.

First, there’s this ad from the June 11 1947 Toronto Daily Star, in which 9 out of 10 women get to have their hair glorified:

And the November 6 1947 Toronto Daily Star has an ad for a product that offers lovelier skin for 2 out of 3 women: 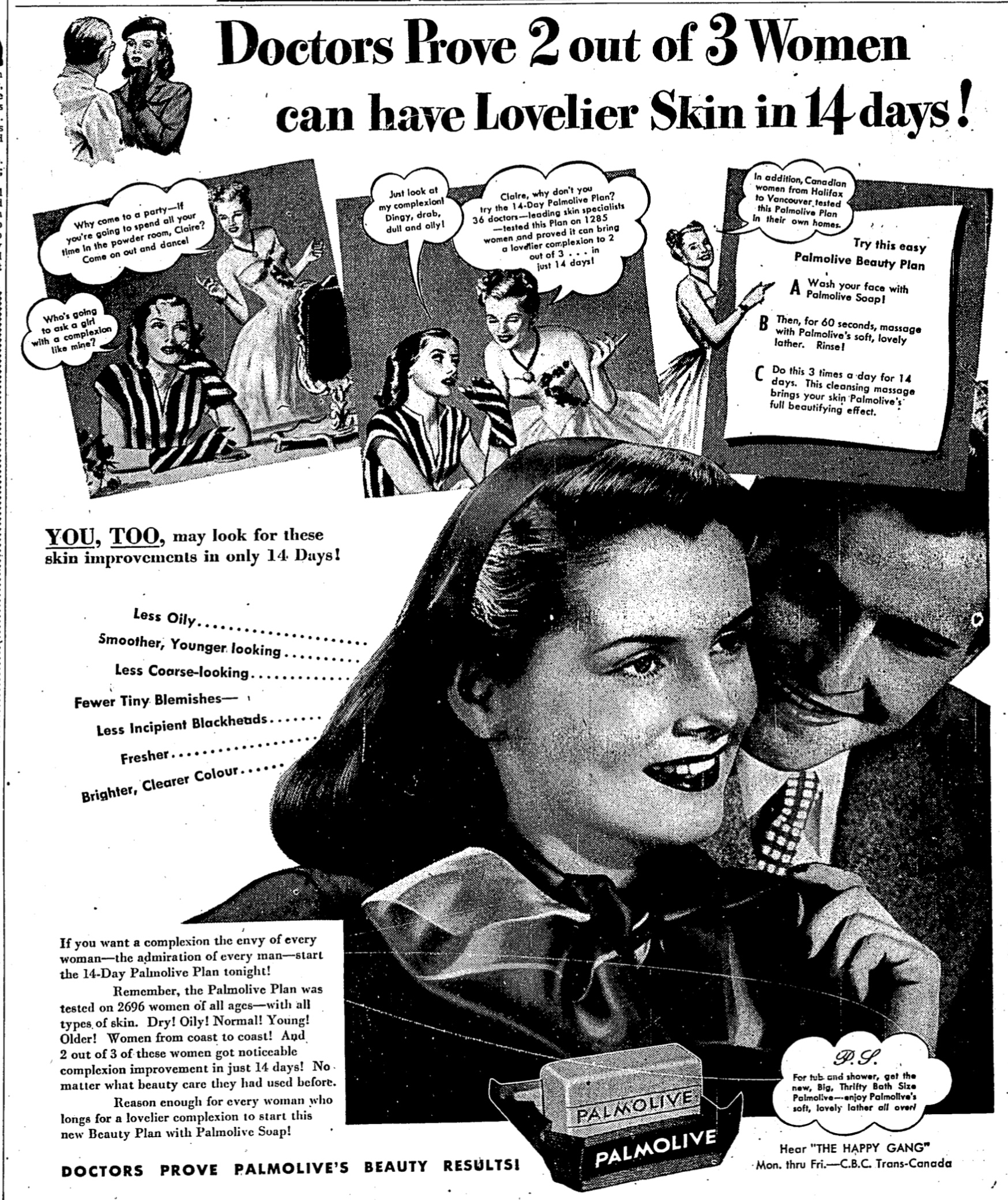 Putting on my nerd hat: if we assume that the two products are independent – if there is no correlation between hair and skin improvement – calculations indicate that 3.3% of women receive no hair or skin help from these products. Pity these unfortunate few!