After the Second World War, the city of Toronto initiated plans to create a civic square in the Chinatown neighbourhood north and west of Queen and Yonge, in what was then known as The Ward. The December 26 1946 edition of the Toronto Daily Star contained an advertisement from the Property Owners Association, which was opposed to the civic square.

Despite this opposition, Toronto voters in the 1947 municipal election approved the creation of a civic square. The land for the square was acquired and expropriated from 1948 to 1958, and construction was started in 1961. Today, the civic square is Nathan Phillips Square.

As for the executive officers of the Property Owners Association listed here:

By the way: this post is a milestone of sorts, as it is my 1000th blog post. In these thousand posts, I’ve learned a lot about obscure celebrities of the 1920s and 1930s and have discovered all sorts of unusual bits of trivia. I’m still enjoying doing this! Thank you for reading or occasionally stopping by.

Here’s a somewhat cryptic advertisement that appeared in the December 26 1946 edition of the Toronto Daily Star:

Frank O’Hearn was a candidate for mayor in the upcoming Toronto municipal elections, which were to be held on New Year’s Day, 1947. O’Hearn finished second in the voting, but that was because the incumbent mayor, Robert Hood Saunders, was popular enough that no serious candidates opposed him. Besides Saunders and O’Hearn, only Murray Dowson, a Canadian Trotskyist, ran for the mayor’s chair that year.

O’Hearn went on to form a religious organization in 1961 called The Order of God-Like People. He then formed the New Capitalist Party, which ran three candidates in the 1965 Canadian federal election. The party’s platform included giving Canadians the $1,000 each that the banking system had allegedly stolen from them and lowering the price of bread to five cents a loaf.

The Toronto Raptors have been an NBA franchise now for a quarter of a century, but you might not know that the Raptors are not the first professional basketball franchise to play in Toronto. The Toronto Huskies played in the 1946-47 Basketball Association of America (BAA) season, compiling a 22-38 record and then disbanding.

Here’s a photograph from the December 26 1946 edition of the Toronto Daily Star of a member of the Huskies with one of their fans:

“Lanky” was a good word to describe forward-centre Bob Fitzgerald, as he was 6’5″ and weighed 190 pounds.

Fitzgerald did not have a long professional career. He played 31 games for the Huskies before being traded to the New York Knicks in mid-season. He played in the National Basketball League in the 1947-48 season and then returned to the BAA with Rochester in 1948-49. He passed away in 1983 at the age of 60.

Fitzgerald’s older brother, Dick Fitzgerald, played in all 60 games for the Huskies in 1946-47. Except for one game with Providence of the BAA the next season, it was his only season as a professional basketball player.

I did a Google search for Masie Hutchison and looked her up in the 1946 Toronto city directory, but did not find her in either location.

Here’s an ad from the September 16 1946 edition of the Toronto Globe and Mail for Blackstone, the magician:

Harry Blackstone Sr. (1885-1965) was one of the last of the old-school breed of magicians who performed in white tie and tails. He was arguably at the peak of his career in the 1940s, as a comic book and a radio series were created in that decade that featured him. His son, Harry Jr., also became a magician.

YouTube has footage of him performing in 1956 (though the sound quality is poor), along with this commercial for Post cereals.

Here’s a short sad story from the September 16 1946 edition of the Toronto Globe and Mail:

Presumably, this sort of accident is why window cleaners now work on hoists outside the building, rather than clinging to the building the way that poor late Mr. Thompson did.

I found Samuel Thompson in the 1946 Toronto city directory: his occupation is listed as “window clk Can Perm Mort”. The Canada Permanent Mortgage Corporation is listed at 320 Bay, so I’m not sure if this is the same place.

One final thought on this sad event: the “Path of Fall” photo and diagram in this article is (a) somewhat ghoulish, and (b) somewhat obvious. Doesn’t most falling happen in a downward direction?

Here’s an ad in the September 16 1946 edition of the Toronto Globe and Mail for a CBC radio program titled Canadian Cavalcade:

I couldn’t find anything on Canadian Cavalcade, but I did find some information on the people mentioned in this ad:

The September 16 1946 edition of the Toronto Globe and Mail contained this notice from the Department of National Revenue, as it was then called:

I’ve read this several times, and I have no idea what it means.

The Income War Tax Act was created in 1917; it called for what was then considered a temporary income tax to help fund spending for the First World War.

Except for the occasional cryptic message, almost all of these messages are from people going somewhere or wanting to go somewhere. Gas rationing was still in effect, so people needed to join forces if they wanted to travel any distance.

Here’s a publicity photo from the July 20 1946 edition of the Toronto Daily Star, featuring an actress who was looking for a husband.

The good news for Adele Jergens (1917-2002) was that she eventually found the husband she was looking for. She met Glenn Langan on a movie set in 1949; they married that year. The marriage lasted – they remained together until he passed away in 1991.

Here’s a photo from the July 20 1946 edition featured a publicity photo of two movie stars who had just adopted a child. 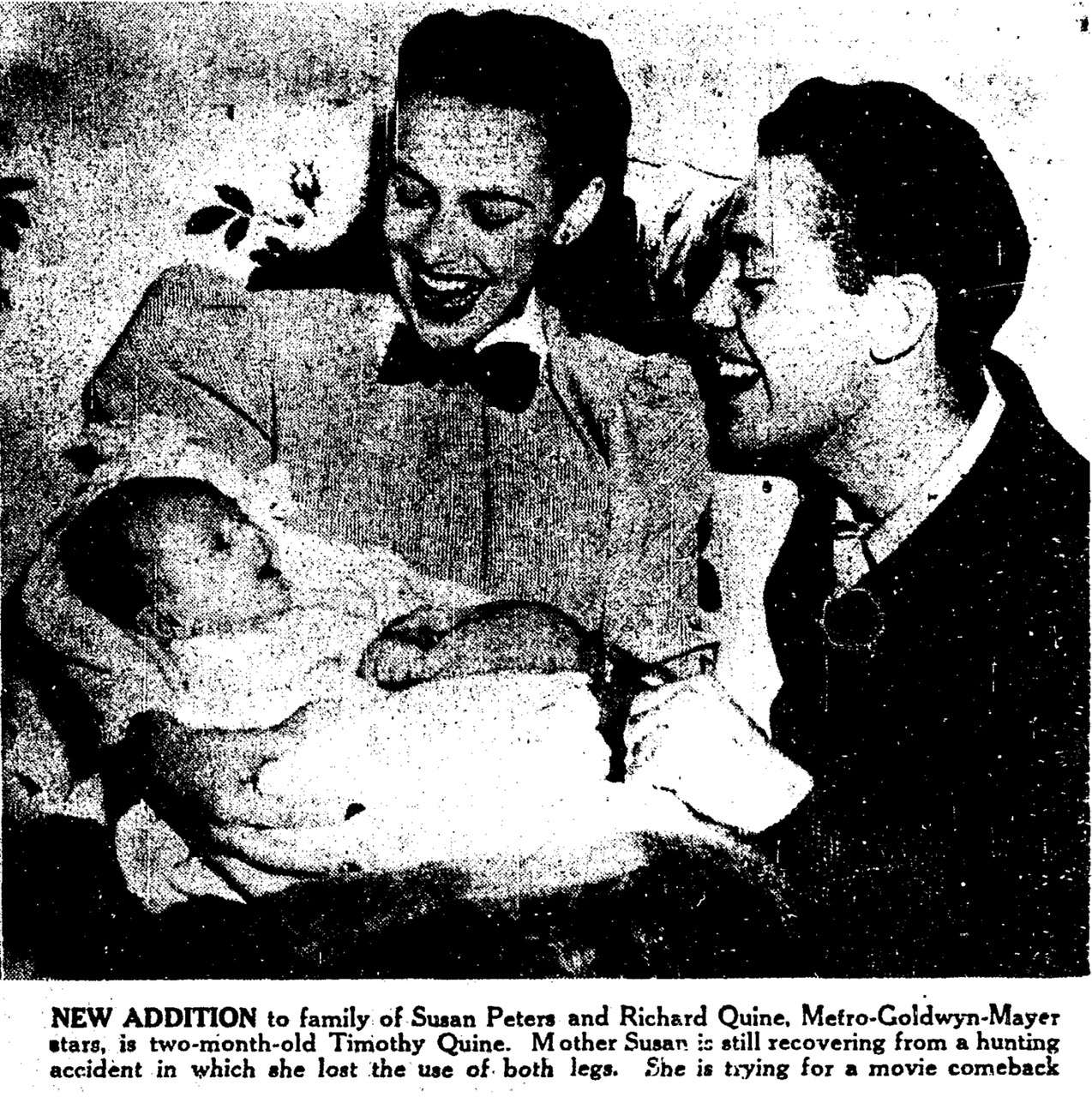 Susan Peters (1921-1952) did not have a happy life after this photo. After her accident, the former Academy Award nominee was offered parts as “crippled girls who were all sweetness and light”, which she turned down. Eventually, she and Quine divorced and her career went into decline; depressed, she stopped eating and died of a kidney infection and bronchial pneumonia.

Richard Quine (1920-1989) doesn’t have a happy ending to his life story, either. After he and Ms. Peters divorced, he went on to marry three more times, and dated Natalie Wood and Kim Novak, among others. In 1989, after an extended period of depression and bad health, he shot himself.