The January 23 1930 edition of the Toronto Globe contained two different ads for travelling to California.

The first was from the Santa Fe Railway:

The Santa Fe railway’s full name was the Atchison, Topeka, and Santa Fe Railway (or AT&SF for short). It stopped operating passenger trains in 1971.

The same paper also had an ad from Canadian National Railways: 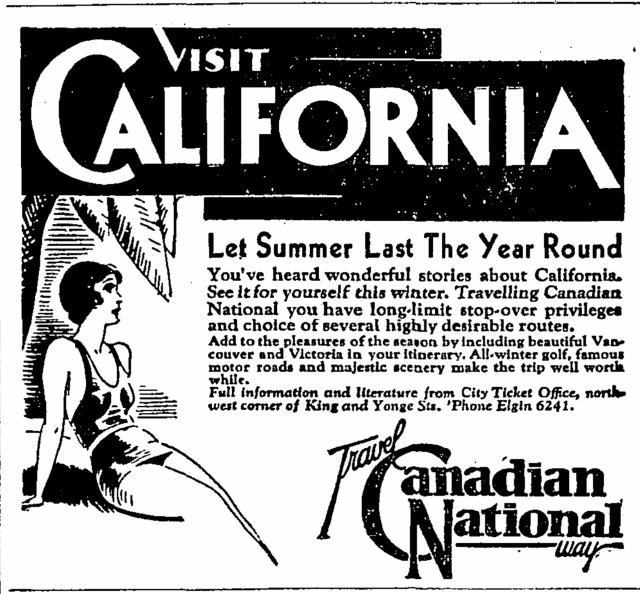 Wikipedia’s page on the Canadian National Railway is here.

Here’s another item from the October 8 1926 edition of the Toronto Daily Star (I’ve found a lot of interesting stuff there).

Annette Hanshaw (1901-1985) had sold over four million records by 1934, the year in which Radio Stars magazine voted her the best female popular singer. According to a biography on a Jazz Age music site, she was a shy, introverted person who never toured or performed on stage. Her music career ended in 1937 when she retired to become a housewife.

Naturally, YouTube now has the songs mentioned in this ad:

A story that would have captured some interest in 1926 was the marriage of James “Bud” Stillman, heir to a fortune, and a young woman from Quebec named Lena Wilson, who had served as a helper on Mr. Stillman’s mother’s property. This is partly because Mr. Stillman’s parents had recently had notorious marital troubles, but partly because the romance had the trappings of a fairy tale.

Here are photographs of the happy couple, from the October 8 1926 edition of the Toronto Daily Star:

Ms. Wilson was referred to as a “woodland bride” and an “untutored bride” in many newspaper reports. Another article in the same edition may have been intended to counteract this.

The article takes pains to point out that the future bride is “the picture of health and a comparative stranger to cosmetics”.

Here’s a bit of filler that appeared twice in the October 8 1926 edition of the Toronto Daily Star:

This proclamation was the idea of Frederick L. Conboy, the former president and later secretary-treasurer of the Ontario Dental Association. The Torontoist has an article on Mr. Conboy, who later became mayor of Toronto from 1941 to 1944. His Wikipedia page is here.

I could find no further information on Ontario Dental Day; apparently, it might not have been commemorated after 1926. Last year, the Ontario Legislature proclaimed April 26 as Ontario Dentist Day, but that’s not quite the same thing.

Do you remember the game “broken telephone”? This is when one person whispers something in your ear, and then you have to whisper it to the next person in line, and so on. Inevitably, the last person in line receives something completely different from what the first person started with.

I found an example of “broken telephone” in the October 8 1926 edition of the Toronto Daily Star. The initial article was about a Toronto Hydro lineman who fractured his skull when he fell off a pole:

Later in the same edition, there was a picture of the unfortunate Mr. Smith, along with a picture of a boy who also suffered a fractured skull. So far, so good, as the details of both articles seem to match:

Now here’s the broken telephone part. Later in the same edition, I saw this bit of filler: 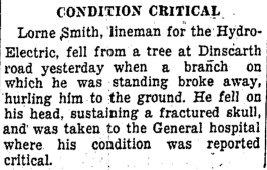 Happily, Roland survived his injury. He appears in the 1928 and 1929 city directories at his 328 Ossington Avenue address, and appears in the 1930 directory at 1708A Queen West. I hope this meant that he got to enjoy many years with his family.

When looking up Roland Smith, I discovered that there was another Roland Smith who  worked with Toronto Hydro at the same time – the one in the article above was Roland H. Smith, and the second one was just plain Roland Smith. The second Roland Smith also moved in 1930, which must have made things very confusing for the Toronto Hydro human resources department.

When I see an ad, I sometimes like to track the firm in the Toronto city directories to see how long they remained in business. For example, here’s an ad from the March 31 1931 Toronto Daily Star:

The Toronto Wet Wash Laundry originally opened for business sometime between 1910 and 1915 at what was then 291 Arthur Street. Its proprietor was W. John Henning. By 1920, this address was 1125 Dundas West.

By 1925, the laundry had moved to 175 Ossington Avenue (just around the corner from their old location). By 1935, the company had renamed itself Toronto Launderers and Dry Cleaners Limited, having branched out into dry cleaning. Mr. Henning was still in charge, with his wife listed as vice-president. By 1945, their son, W. John Henning Jr., was treasurer.

The company remained in business through at least 1969, but it looks like the family had sold it long before – the 1955 city directory shows W. John Henning (presumably Junior) as the operator of Henning’s Garage. The 175 Ossington Avenue location is now townhouses.

When looking up entries in Toronto city directories, I have frequently found listings for Authors & Cox, a firm that specialized in artificial limbs, trusses, belts, and other aids for injured or disabled people. In the February 22 1937 edition of the Toronto Daily Star, the company celebrated its 70th anniversary, making it slightly older than Canada itself:

The January 18 1924 Toronto Globe contained this ad for Wyeth’s Sage and Sulphur Compound.

The Hair Raising Stories website has a brief entry on this compound. It was apparently trademarked in 1909, and the company was fined in about 1921 because its brand name was misleading. I have no idea whether it worked or not, but there is no modern equivalent, so I assume it was either unsafe or ineffective.

The January 18 1924 edition of the Toronto Globe listed a number of entertainment options for people interested in an evening out. Here’s the first group:

The Rosenthal mentioned here was almost certainly Moriz Rosenthal (1862-1946), a Polish pianist and composer. There are a number of recordings of him on YouTube, including this 1937 live recording.

Cecelia Hansen (1897-1989) appears to have a Wikipedia page in German only. She was a Russian-born violin virtuoso. Some of her recordings are on YouTube as well, including this one, which I found quite haunting.

Amelita Galli-Curci (1882-1963) was a self-trained coloratura soprano from Italy who was hugely popular in her prime. A recording of her singing a piece from Act I of La Traviata can be found here.

Sir John Martin-Harvey (1863-1944) was an English actor, known as John Martin Harvey before being knighted in 1921. He was part of Sir Henry Irving’s company of players. Pathé Films has footage of him unveiling a memorial tablet of Irving.

Walter Scanlan was the stage name of Walter Van Brunt (1892-1971). The original Walter Scanlan had been a famous 19th century Irish tenor who passed away without making any recordings. Van Brunt, as Scanlan, had 40 hits on the pop charts. He was notorious for having a bigamous affair, which caused his wife Lillian to divorce him in 1925.

Minnie Maddern Fiske (1865-1932), often billed simply as Mrs. Fiske, was widely considered to be the most important female actor in America in the first quarter of the 20th century. She was an animal rights advocate, and fought against the Theatrical Syndicate‘s control of theatre bookings.

The Fool was a play written by Channing Pollock. A Fox film production of this play in 1925 was lost in the Fox vault fire of 1937. I have no idea who the 87 leading Torontonians were – did the Grand Theatre keep a list?

After that, the record gets murkier. I could find no record of The Other Wife. The Internet Broadway Database has a record for The Mad Honeymoon, which ran for 16 performances on Broadway in August 1923, but I don’t know anything else about it.

Ella Shields (1879-1952) was a music-hall singer and male impersonator who toured as “Burlington Bertie”. For a while, during the Depression, she was forced to work at a Macy’s jewelry counter in New York, but her career revived in the late 1940s. She worked with a very young Julie Andrews during that time, and may have been the inspiration for Andrews’ character in Victor/Victoria.

Old newspapers seemingly kept a file of short bits of filler that they could use when a column had unused space in it. This item from the March 23 1950 Toronto Daily Star is one of the most obscure:

Clearly, their filler supply was from the United States, as (last I checked) Washington, Oregon, and California are not part of Canada.

By the way, this statement is no longer true: as of 2017, the three U.S. states with the largest hop production were Washington, Idaho, and Oregon.