Here’s a brief article in the July 5 1930 edition of the Toronto Daily Star about a man who was about to go over Niagara Falls in a barrel: 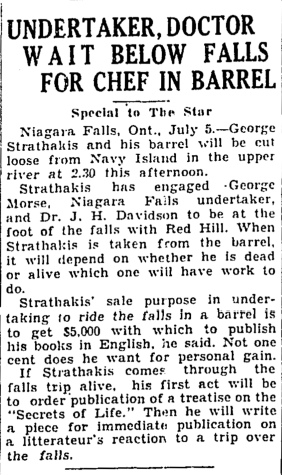 Wikipedia has an entry listing all of the people who have gone over Niagara Falls accidentally or deliberately. From this, I learned that Mr. Strathakis’ fate was a cruel one: he apparently survived the trip over the falls, but his barrel was stuck behind a curtain of water for 18 hours and could not be retrieved. Since his barrel had only eight hours’ supply of air, he suffocated to death. Presumably, the undertaker and the doctor didn’t wait around that long.

No one attempted to go over the falls in a barrel again until 1951, when William “Red” Hill Jr. tried and failed. Mr. Hill was the son and namesake of a legendary rescuer and daredevil who saved a total of 28 lives near the falls. The next successful attempt was in 1961, when Nathan Boya went over in the “Plunge-O-Sphere”.

A seven-year-old boy, Roger Woodward, went over the falls by accident in 1960 and survived. There is video footage of him being interviewed in 1975 as part of an art project, and he was also interviewed about his ordeal in 2015.