Here’s an ad for an upcoming serial from the June 22 1935 edition of the Toronto Daily Star:

This ad doesn’t mention that Sweet Danger is by Maysie Grieg – we’ve encountered it and her before in this blog. The first installment of the serial, published on June 24, includes a drawing of Jan (and an ad for Kkovah Salts):

Apparently, Jan had “a vivid, glowing, red-brown beauty that reminded you, somehow, of firelight.” I guess this is a good thing.

Interestingly enough, there is another novel called Sweet Danger, by Margery Allingham and published two years earlier, in 1933. The list of characters in Ms. Allingham’s novel (taken from Wikipedia) makes for great reading:

Who among us has not wanted a servant named Magersfontein Lugg or an old friend named Guffy? 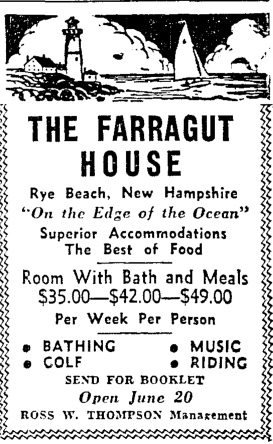 The Farragut House was an enormous old hotel that was built in 1883, replacing an earlier hotel that had burnt down. It was closed in 1974 and torn down in 1975. There are a number of sites that discuss this hotel, including a New Hampshire history blog and the New Hampshire Then and Now Facebook group.

The June 22 1935 edition of the Toronto Daily Star contained this brief and somewhat mysterious ad:

519 Jarvis Street is a heritage building: it’s one of the two Massey Houses. The other, 515 Jarvis, is currently a Keg Steakhouse. 519 Jarvis stayed in the Massey family until at least 1925; Ms. Bates was one of the people living there in 1930. (515 Jarvis, among other things, was the home of Ryan’s Art Galleries and a convalescent military hospital.)

The June 22 1935 edition of the Toronto Daily Star contained this brief article about the oldest living member of Toronto’s oldest family:

Question: shouldn’t Col. Shaw’s nine accidents have done him in, since cats have nine lives?

I found a listing for Lt. Col. G. A. Shaw in the 1935 Toronto city directory – he was living at 189 Dunn Avenue. Cross-referencing the Streets section of the directory shows him as the only listed resident at 189 Dunn – he was either living alone or with family who were not listed.

Looking back at random, I found him in the 1900 directory – at the time, he was listed as “Vice Consul Hawaii”, and was living at 44 Leopold. He wasn’t in the 1880 directory – presumably, he was on active service at the time.

Looking forward, I found him in the 1936 directory but not the 1937 directory. Perhaps he had his 10th accident that year.

Presumably, since the Shaws were Toronto’s oldest family, Shaw Street is named after them.

Here’s a couple of filler articles from the June 22 1935 edition of the Toronto Daily Star describing infestations.

First, there were worms in the North Bay area:

I don’t know about you, but the idea of a mound of worms six inches high gives me the squicks.

If worms aren’t your thing, how about Spanish mosquitoes?

Apparently, many scientists foresee that insects will rule the world. Unless they are kept back with swatters and disinfectant guns, of course.

Here’s a drawing of a luxury home about to be built in Rosedale, as seen in the May 16 1930 edition of the Toronto Daily Star:

I traced the house in the Toronto city directories:

Here’s an ad for a new restaurant on Bloor Street, from the May 16 1930 edition of the Toronto Daily Star: 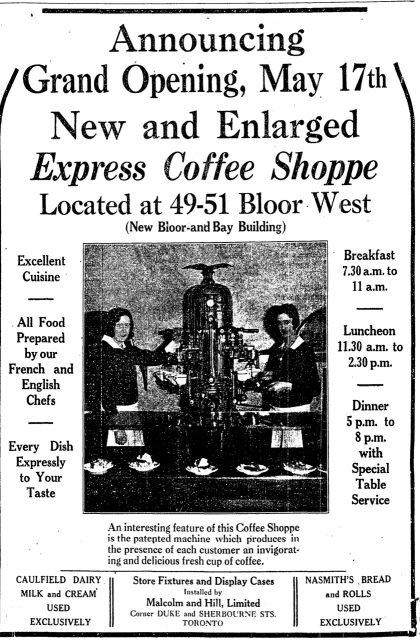 This seemed like quite an ambitious undertaking, particularly in the middle of the Great Depression. Sadly, it did not survive long: the Express Coffee Shoppe appears in the 1931 Toronto city directory, but does not appear in the 1932 directory.

Out of curiosity, I cross-referenced the listing in the names section of the city directory, to see if I could find out more. The entry for Express Coffee Shoppe listed, among others, T. B. Smyth as president and J. T. Hulse as the manager:

Oh, well. I hope what customers they had enjoyed the Caulfield dairy milk and cream and the Nasmith’s bread and rolls.

Here’s a sad story from the May 11 1934 edition of the Toronto Daily Star:

This story caught my attention because “Stafirrny” is such an odd name – was that really the unfortunate girl’s last name?

I checked in the Toronto city directories, and I couldn’t find any information. The listed resident at 77 Tecumseth was Vincent Bakalarski, and there’s no name similar to “Stafirrny” on the street or anywhere in the directory. Perhaps the name was given over the phone and badly misinterpreted.

There was a Frank Collard on Browning Avenue – in fact, there were two: Frank and Frank A., both working as cartage agents and both living at 92 Browning. I assume that this was a father and son, one of whom was responsible for the death of a girl whose name we will never accurately know.

Here’s a photo from the May 11 1934 edition of the Toronto Daily Star:

She and Mr. Hill did indeed marry; she was 19 at the time. But their marriage did not last, as she married a man named Teuber in 1942. She was inducted into the International Swimming Hall of Fame in 1968.

I usually haven’t been looking at the want ads from old newspapers, but I took a quick look at the personals section of the May 5 1933 edition of the Toronto Daily Star: 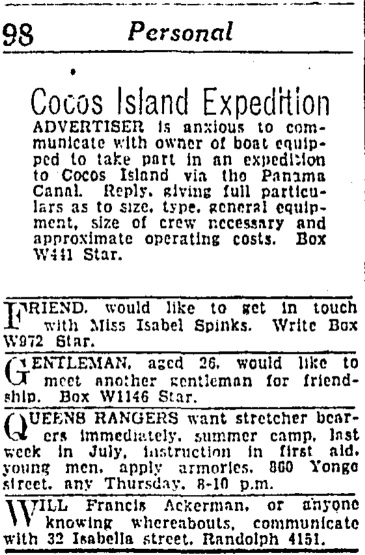 Going through these in order: