Here’s a photograph from the March 20 1933 edition of the Toronto Daily Star of a Toronto couple on holiday: 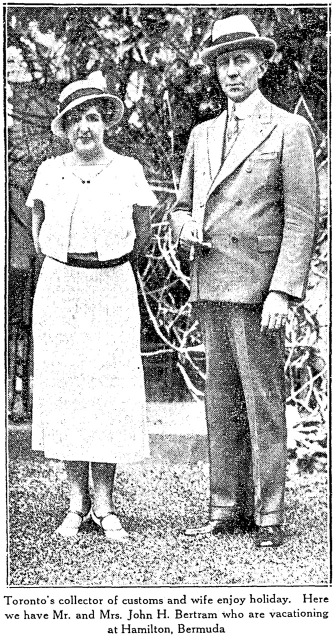 Notice that Mr. Bertram is still dressed in a three-piece suit and tie on holiday. This was presumably the convention back then.

I tried to trace the Bertrams in the Toronto city directories. He was easy to find in the 1933 directory – he had a listing in bold face. He appeared in every directory up to 1937, but was not in the 1938 directory. There is no listing for his widow in 1938, so either she predeceased him or the Bertrams moved elsewhere.

I’m kind of hoping that he moved, and that he and his wife got to enjoy more Bermuda holidays.