The October 17 1927 edition of the Toronto Daily Star contained this film advertisement: 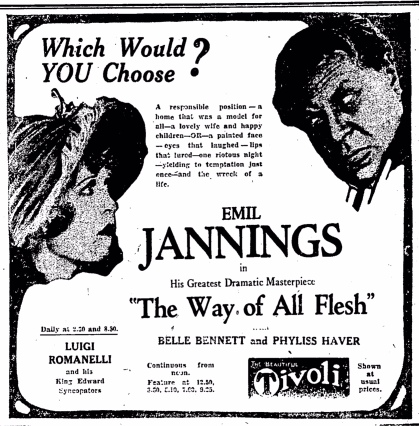 When I looked up The Way of All Flesh in Wikipedia, I discovered that it was lost, and that it is the only lost film in which one of the stars won an Oscar.

Emil Jannings (1884-1950) won the first Oscar in 1929 for his work in this film and in The Last Command (1928). He also had a leading role in The Blue Angel (1930), the film that made Marlene Dietrich a star. Unfortunately, he went on to star in several pro-Nazi films in his native Germany.

Phyllis Haver (1899-1960), whose name was misspelled in the ad, was credited in the movie as simply The Temptress. She appeared in movies until 1930, which is about when she married William Seeman, a millionaire; New York mayor James J. Walker performed the service. They divorced in 1945, and Ms. Haver passed away from an overdose of barbiturates in 1960.