The September 22 1926 edition of the Toronto Daily Star contained this patent medicine ad:

As usual with patent medicine ads that contained a Toronto name and address, I looked in the Toronto city directories to check whether this was a real person. I discovered that the 1926 directory listed Edson Bradshaw at 413 Wellesley, so he actually existed.

However, Mr. Bradshaw might have just had a change of fortune. The 1925 directory lists him as a painter and decorator at 159 Bleecker, but the 1926 directory lists him with no occupation. Either the directory compiler didn’t record his job, or he was now out of work; if the latter, he might have been more likely to offer a paid endorsement to Tanlac.

I tracked Mr. Bradshaw for a bit:

I hope this meant that his misfortunes were now behind him, and that he was in good health, with or without Tanlac.

The Weird Universe site has an entry on Tanlac. Apparently, it had been exposed as a fraud in 1915, but continued to be sold for at least another 30 years.

The September 22 1926 edition of the Toronto Daily Star contained this plea for help:

A search through the Runnymede section of the Toronto city directories revealed that her name was actually Alice Collinson, and her address was actually 22 Jillson Avenue. She appears in the 1927 and the 1928 city directories, which I hope means that somebody found her.

22 Jillson Avenue still stands, but appears to have been remodelled.

The February 12 1948 edition of the Toronto Daily Star contained this photograph of two movie stars who had just gotten married:

Unlike many of the other movie star marriages that have been chronicled in newspaper photos here (including in yesterday’s blog entry!), the marriage between Googie Withers and John McCallum lasted. They remained married until McCallum passed away in 2010 at the age of 91. Ms. Withers passed away a little over a year later, aged 94.

The September 18 1931 edition of the Toronto Daily Star contained this photo of two movie stars who had run off to Las Vegas to get married: 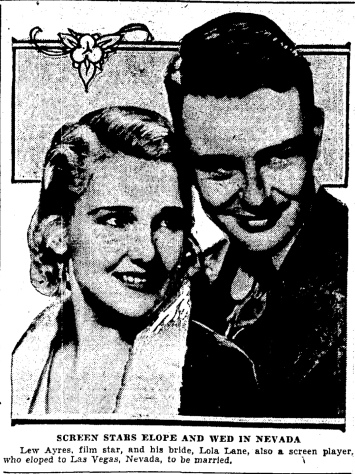 Sadly, the couple’s marriage did not last long. They were separated soon after, and divorced in 1933.

Here’s a photo from the August 29 1933 edition of the Toronto Daily Star, featuring a challenger for the Harmsworth Cup, a boat competition between nations:

Canada still considered itself a British nation in 1933, at least according to this article: all Canada was expected to be rooting for Hubert Scott-Paine, an Irish-Englishman, and his boat Miss Britain III.

At this point, I guess everybody lost interest – the competition was not resumed again until 1949. (Of course, the war would have gotten in the way.)

Hubert Scott-Paine (1891-1954) didn’t win the Cup with Miss Britain III, but he did set a record speed for a single-engined boat in 1934 with her, reaching 110.1 mph. (Miss Britain III is now housed at the National Maritime Museum at Greenwich.) Scott-Paine later went on to found a company that built, among other things, the PT boat that John F. Kennedy sailed in during World War II. He became an American citizen in 1948.

Here’s a photo from the August 26 1926 edition of the Toronto Daily Star:

When I saw this, I wondered who was elected president on the other nights of the week. But whatever.

Out of curiosity, I traced J. Grittani in the Toronto city directories. He turned out to be Joseph Grittani, and he worked as an insurance broker for Sun Life. He seems to have had a successful and uneventful life: in 1931, he moved to 2 Northcliffe Boulevard, which remained his home base for many years. By 1941, he had struck out on his own; he is listed as an insurance broker with no employer.

By 1946, other family members appear in the directory: Gloria and Howard are there. In 1951, Joseph Jr. is at the family address; he went into the insurance business too, and by 1956, father and son had started a company together. It was listed in the 1961 and 1966 directories. By 1969, the last year that I could view, Joseph Senior had retired. So he seems to have lived a long life.

The Circolo Colombo appears to have been an early organization of Torontonians of Italian origin. I found references to it here and here.

The August 26 1926 edition of the Toronto Daily Star contained this photograph of Canadian swimmer Mary Casson:

My first thought when I saw this was that better dentistry is now available to almost everybody: nowadays, you’d have to be very poor to be young with a tooth missing or lopsided like that.

I couldn’t find anything on Mary Casson, partly because there was an actress with the same name who passed away in 2009 at the age of 95. The only reference that I saw was that she was posthumously honoured at the 2015 University of Toronto Sports Hall of Fame ceremony.

The August 26 1926 Toronto Daily Star contained a brief article on a man from India who had a very long name.

I’m thinking that it was a bit rude of the Daily Star to poke fun at his long name.

When looking this up, I discovered that Diwan Bahadur (or Dewan Bahadur) was a title used when India was controlled by the British, not a name.

I couldn’t find out anything about Sir Tiruvalyangudi Vijayaraghavacharya, other than that he wrote a pamphlet on India in 1944, titled The Land and Its Problems. So he was an influential figure for some time.

The August 26 1926 edition of the Toronto Daily Star featured this ad:

A little digging revealed that 1926 was the year of the first Miss Toronto pageant, and that Jean Ford Tolmie was the winner. She is pictured here (in the white suit) and here (in her victory gown). The pageant was abolished in 1991.

The August 26 1926 edition of the Toronto Daily Star contained this ad for a live performance:

Louise Glaum (1888-1970) appeared in over 110 movies between 1912 and 1925. After this, she returned to the stage, where she started. She toured the Loew’s Theatre chain with The Sins of Julia Boyd and with The Web, which she wrote herself.

The Sins of Julia Boyd was written by Paul Gerard Smith, who also wrote for the Ziegfeld Follies and for Buster Keaton.