The July 14 1930 edition of the Toronto Daily Star contained a bit of filler that was either poorly edited or the UP reporter was being snarky:

Vivian Duncan (1897-1986) combined with her older sister Rosetta to form a vaudeville act called “Topsy and Eva”. They appeared together as late as 1956, when they were on Liberace’s television show.

The July 11 1924 edition of the Toronto Daily Star continues to provide photographs that are interesting to me. Here’s another:

Here’s another photograph from the July 11 1924 edition of the Toronto Daily Star:

Irène Bordoni (1885-1953) was originally from Corsica, and appeared in films and plays in Paris as a child actor. She emigrated to the United States in 1907, and appeared in a number of plays, including Cole Porter’s musical Paris in 1928. This musical featured the song “(Let’s Do It) Let’s Fall in Love”. At her peak, she had homes in New York, Paris, and Monte Carlo.

YouTube has a recording of her singing Porter’s “Let’s Misbehave”. It’s fun, once you get used to Ms. Bordoni’s singing style.

Here’s another photograph from the July 11 1924 edition of the Toronto Daily Star: 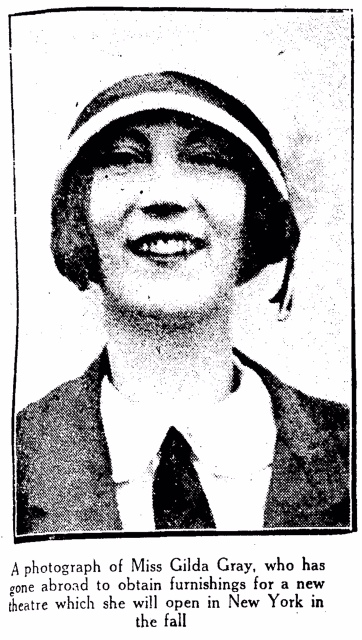 Miss Gray’s real name was Marianna Michalska; born in Poland, she did much to help the country of her birth during the Second World War. After the war, she brought six Polish citizens to America and subsidized their education.

YouTube has footage of her doing the shimmy and of her on Liberace’s show.

I found a few photographs of interesting people in the July 11 1924 edition of the Toronto Daily Star, so that’s what’s going to be in the next few blog posts.

Here’s a photo of Dusolina Giannini, an American soprano. (The Star, or the wire service that the Star got the photo from, had her name wrong.)

Dusolina Giannini (1902-1986) was just starting her successful career when captured in this photograph. During the 1930s and before and after the Second World War, she performed in Chicago, Hamburg, Berlin, Vienna, London, Paris, and as part of the Metropolitan Opera company, where she appeared from 1935 to 1942.

She was from a musical family: her sister was a voice teacher, and her brother composed operas.

There are a number of recordings of her voice on YouTube. One example is Pace Pace Mio Dio from 1945.

The July 9 1926 edition of the Toronto Daily Star contained this photograph of a man who was simultaneously a British baronet and a member of a theatre company playing on Broadway:

Wikipedia has an entry for Sir William Dunn, who was the 1st Baronet of Clitheroe and a former Lord Mayor of London. The page mentions that his son, Sir John Henry, had been located working in a coal mine near Barnsley. I don’t know whether this was before or after he was in the Revue Company.

Searches for John Henry Dunn didn’t turn up anything else, as there was at least one other, more notable, person with that name.

On July 8 1926, the entire staff of the township of Scarborough and their families had their annual picnic at Silver Fern Park. The July 9 1926 edition of the Toronto Daily Star captured the event in photographs.

I could find no reference to Silver Fern Park anywhere. The town of Agincourt has long since been swallowed up by what is now the city of Scarborough; it is bounded by Kennedy Road on the west, McNicoll Avenue on the north, various streets from McCowan to Markham on the east, and Highway 401 on the south. Presumably, the park was turned into housing developments long ago.

One of the common features of the business section of a newspaper is photos of people who have just been promoted to an important position. This has been going on for some time – for example, here’s one from the July 9 1926 edition of the Toronto Star.

Just for fun, and because Mr. Prittie has a distinctive name, I decided to trace him in the Toronto city directories. (What do you do for fun, dear reader?) I didn’t go year by year, so I might have missed some things. Here’s what I found, in chronological order:

24 Hazelton Avenue still stands, though it has been remodelled some; it is now the Ingram Gallery. The gallery has a website, which lists its location as a “historic brownstone”. Sadly, they don’t mention the Pritties, since presumably they don’t know about them.

The July 8 1935 edition of the Toronto Daily Star had a brief article on a man who was jailed ten days for drunk driving:

The punishment would not be so lenient today.

The July 8 1935 edition of the Toronto Daily Star included a bit of filler about oil magnate John D. Rockefeller, who turned 96 that day, and had 19 of his original teeth.

My question: who counted his teeth?

Rockefeller didn’t make it to 100, by the way: arteriosclerosis did him in a few weeks before his 98th birthday.