Here’s a photograph from the June 20 1933 edition of the Toronto Daily Star, featuring a three-year-old boy with Clark Gable’s smile and Jean Harlow’s hair:

A Google search determined that this caption is inaccurate, as there was no one named Bobby Cook who ever appeared in a movie with Clark Gable and Jean Harlow around 1933.

This is likely a publicity shot for Hold Your Man, which was released a month after this photo appeared. The cast list for this movie includes Bobby Caldwell as the uncredited son of Gable and Harlow’s characters; the little boy in the photo was probably him.

Bobby Caldwell was born in 1928, so he would have been four, not three, when Hold Your Man was filmed. He went on to appear in a total of 14 movies, and was uncredited in all but two of them. His last film was in 1940; he passed away in 1982 at the comparatively young age of 54.

Here’s a photo from the June 18 1934 edition of the Toronto Daily Star:

Ernestine Schumann-Heink (1861-1936) was born Ernestine Rössler in what is now part of the Czech Republic. She picked up her hyphenated name the hard way: she married and divorced Johann Heink and then married and was widowed by Paul Schumann.

Her first public performance was in 1877. She became an American citizen in 1908, which led to her having children fighting on both sides during World War I. She unfortunately lost most of her money in the 1929 stock market crash.

A number of recordings of her exist on YouTube, including this 1917 recording of her singing “Danny Boy”.

The June 18 1934 edition of the Toronto Daily Star contained this advertisement for an upcoming novel that the paper was planning to serialize:

Philip Gibbs (1877-1962) was a journalist and official war correspondent for Britain during the First World War, for which he was knighted in 1920. He was a prolific writer, but he appears to have focused mostly on non-fiction. The list of his works in his Wikipedia page mentions that he occasionally wrote novels, but does not include Spotlight on Paradise. I can find no mention of it anywhere.

The front page of the June 18 1934 edition of the Toronto Daily Star contained this photograph:

Alexis Mdivani (1905-1935) was only a self-styled prince. He was one of the Marrying Mdivanis, a family of three brothers and two sisters from Georgia (the Asian one, not the American one), who all married into wealth and fame. Alexis, the second youngest, started off by marrying a member of the Astor family, but ditched her to marry Barbara Hutton, heiress to the Woolworth fortune and worth over $50 million on her 21st birthday in 1933.

The marriage apparently was a calculated plot by Mdivani and one of his sisters to entrap Ms. Hutton into marriage through scandal. Mdivani spent his new wife’s money lavishly before the two divorced in 1935. He died in an automobile accident in Spain later that year.

Ms. Hutton married six more times, all ending in divorce. She passed away in 1979, nearly bankrupt as the result of exploitation, generosity, and excessive spending.

The June 13 1927 edition of the Toronto Daily Star contained an article about plans to annex land in East York to build a new hospital:

The June 13 1927 edition of the Toronto Daily Star contained this photograph of a young woman about to be presented to the royal court:

When I searched for references to Ms. Macaviti or her father, I drew a complete blank. Either the caption has the wrong name, or daughter and son are lost to history.

The June 13 1927 edition of the Toronto Daily Star contained a 10-question mini-quiz. Before you scroll down and peek at the answers, why not try the quiz yourself?

It turned out that the answers weren’t on page 7 – they were on page 10. Here they are: 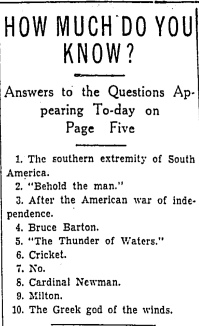 Three people are mentioned in this quiz:

Here’s one last photograph from the June 10 1929 edition of the Toronto Daily Star, featuring King Boris of Bulgaria and his sister, Princess Eudoxie:

Boris III of Bulgaria (1894-1943) became King of Bulgaria in 1918, when his father abdicated after being on the losing side in World War I. Being a king in Bulgaria was not easy: anarchist groups attempted to assassinate him twice in 1925, and he was reduced to puppet status in 1934 when a military dictatorship was established. He staged a counter-coup in 1935, and (according to Wikipedia) Bulgaria “entered an era of prosperity and outstanding growth” lasting nearly five years.

Then Hitler happened. Bulgaria had been on the side of Germany in the previous war, and sort of lined up with the Axis powers in the second one. But King Boris refused to deport Bulgarian Jews and refused to send troops to fight Russia, which somebody important might not have liked; the king died unexpectedly of heart failure on August 28, 1943. Doctors who attended him think that he might have been poisoned.

By the way, King Boris wasn’t a bachelor king for long – he married Giovanna of Italy, daughter of the King of Italy, in 1930. Benito Mussolini apparently registered the marriage himself.

Life wasn’t exactly easy for Princess Eudoxia (1898-1985) either – in 1944, she was arrested and tortured by the Communists, but was eventually allowed to leave Bulgaria. She never married.

The June 10 1929 edition of the Toronto Daily Star contained a photograph of 11-year-old Joan Brunton, who was training to swim the English Channel in August of that year.

This photo was obviously taken at the same time as this British Pathé newsreel. My searches also turned up:

I could find nothing on whether she made it, but this list of notable successful channel swimmers lists the youngest successful female swimmer as Samantha Druce, who was 12 years and 118 days old when she crossed in 1983. This suggests that Ms. Brunton was unsuccessful.

I could find nothing at all on her that was later than 1929, so I assume that she did not have a career as an adult swimmer. Her adulthood appears to be lost to history.

Here’s a photo from the June 10 1929 edition of the Toronto Daily Star, featuring young movie stars getting married: 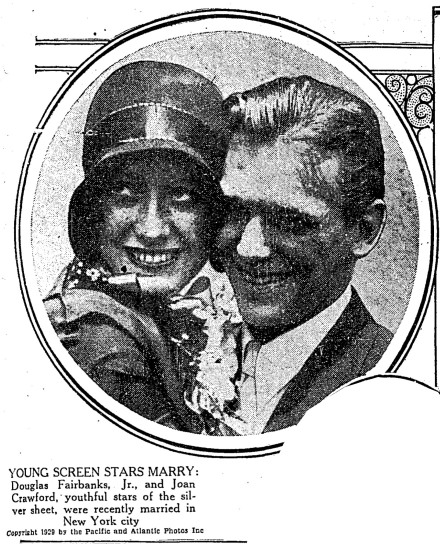