The December 2 1926 edition of the Toronto Globe contained this ad for an optician:

A search of the Toronto city directories indicates that William C. Knox (himself) set up shop at the 262 1/2 Yonge Street location sometime between 1915 and 1920. He was still there in 1930, but by 1933 other family members had joined him to form W. C. Knox Ltd. at that location. By 1935, this location became Proctor Optical, discussed elsewhere in this blog.

Here’s an ad from the December 2 1926 edition of the Toronto Globe that I was not able to completely figure out: 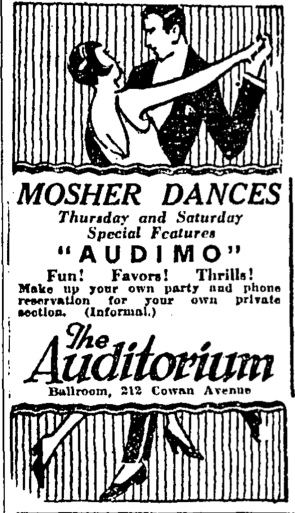 I have no idea what a Mosher dance is, and a Google search turned up nothing. My best guess is that it was related to the Mosher School of Dancing, which existed near Bay and Bloor in the late 1920s.

A Google search for The Auditorium and 212 Cowan Avenue also both turned up empty. The 1926 city directory lists the Pavlowa Dancing Academy at 210 Cowan Avenue; this is probably what this was. This dancing academy appears in the 1928 directory, but not the 1929 one.

The area around 210 Cowan Avenue now appears to be a park that serves the nearby high-rises on Dunn Avenue.

The April 21 1926 edition of the Toronto Globe and Mail contained a photograph of a couple who were celebrating their 50th wedding anniversary:

As usual, when I find one of these, I indulge in morbid curiosity: for how much longer were the two able to enjoy wedded happiness?

I looked in the Toronto city directories, and discovered that the Millses had only recently moved to 177 Craighurst Avenue. In the 1926 directory, Robert Mills was listed at 160 Redpath (I knew that this was the correct Robert Mills because the 1925 directory listed his occupation as bursar of St. Andrew’s College). He is listed at 177 Craighurst from 1927 to 1932, but does not appear in the 1933 directory.

Unfortunately, there is no record of Mrs. Mills, as the Toronto city directories only ever list the male head of a household, and this article doesn’t give her first name. I did a search through the people named Mills in the 1933 directory, and there was no one listed as the widow of Robert (or Robt, in the directory shorthand). Presumably, Mr. Mills became a widower sometime between 1926 and 1932, but we’ll never know when.

As for 177 Craighurst: this house and its neighbours on either side have been recently rebuilt or remodelled to be larger than the houses around them.

The April 21 1926 edition of the Toronto Globe contained an announcement of a daughter born to the Duke and Duchess of York: 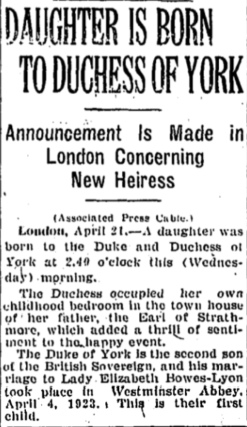 The article does not mention the name of the child – though, since she had been born that very day, perhaps her name had not been decided.

At the time, this announcement might not have seemed that important. The Duke of York was second in line to the throne, and the eldest son, commonly known as David, was young enough to marry and produce heirs. But, as it turned out, David became King Edward VIII and abdicated his throne in 1936. The Duke of York became King George VI, and the unnamed daughter eventually became Queen Elizabeth II.

The March 21 1933 edition of the Toronto Globe contained a brief article about a mountain in Colorado that appeared to be moving, following a rockslide:

The town of Durango apparently tried to market the moving mountain as a tourist attraction. Unfortunately, or perhaps fortunately, the rockslides stopped in 1933.

You can now hike Carbon Mountain.

On March 21 1933, Eaton’s was closed all day as a gesture of respect, as the funeral for the widow of founder Timothy Eaton took place that afternoon. The Toronto Globe contained a note that mentioned this.

The late Mrs. Eaton had been a widow for over 26 years.

The makers of the Norge clothes dryer wanted to be sure that readers of the February 26 1954 Toronto Daily Star knew of its existence. There were no fewer than six small ads in the paper for it.

And, if that wasn’t enough, there was also a larger ad that extolled the virtues of the new Norge clothes dryer:

Today’s Internet users are familiar with the concept of “clickbait”, which is a headline that attempts to attract your attention so that you will click on the link and read the associated article (and, in some cases, unintentionally download the associated malware).

While the Internet is relatively new – at least by the standards of this blog – the idea of an attention-getting headline is not. As an example, consider this wire-service article from the February 26 1954 edition of the Toronto Daily Star:

I suspect that this headline caught your attention.

Susan Hayward (1917-1975) was a film star who was at her peak of popularity in the 1950s. Sadly, Ms. Hayward attempted suicide after her divorce from Mr. Barker became final later that year. She remarried three years later, and apparently that marriage was a happy one.

Even more sadly: Ms. Hayward died young of brain cancer, possibly because she appeared in the movie The Conqueror, which was filmed near an atomic test site.

In the February 26 1954 edition of the Toronto Daily Star, a British Conservative MP suggested that the Netherlands, Denmark, and Norway should become part of the British Commonwealth. This apparently was partly because, according to him, they were “racially akin” to Britain: 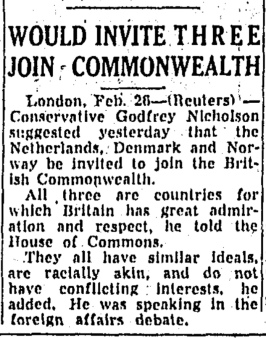 Historic British parliamentary speeches are available online from 1803 onwards; the complete text of Mr. Nicholson’s speech in Parliament that was quoted in the above article can be found here.

In the February 26 1954 edition of the Toronto Daily Star, one discount store owner managed to arrange it so that the ad for his store appeared just above the Honest Ed’s ad:

Unlike a former competitor of Honest Ed’s, Honest Red’s, Arthur’s Bargain Centre remained in existence for quite a while. It first appears in the 1955 city directory – so it was very new at the time of this ad – and it was still there in 1969, though the original Arthur had not been managing the store for quite some time.

I don’t have online directories later than that, and a Google search turned up nothing, so I have no idea what happened to Arthur’s. 345 Danforth is now the home of Riverdale Mac, a computer store.