The June 25 1942 edition of the Toronto Daily Star contained several advertisements that stressed the importance of not wasting tea. I assume that this was because tea was shipped from overseas, and overseas shipping was difficult and costly because of the war.

The ad from Loblaws included this:

And the ad from the Red & White grocery chain included this: 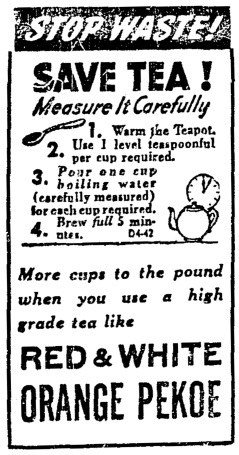 And the Salada Tea company provided this ad:

The instructions appear to be the same in all three cases, though Salada makes a point of suggesting that the water be boiling furiously before pouring it into the teapot.