The Toronto Daily Star did not publish on Christmas Day 1928, but the Toronto Globe did.

Among other things, this edition published Christmas greetings from Eaton’s and Simpson’s: 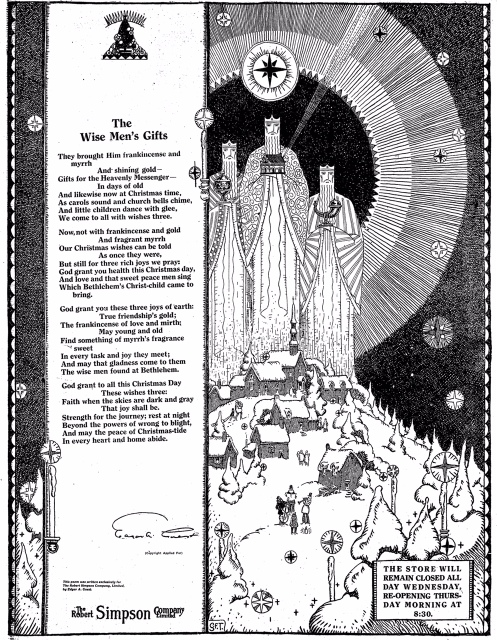 (By the way, I still find it hard to believe that Eaton’s and Simpson’s are both long gone now – when I was young, they seemed like they had been around forever and were impregnable.)

The paper also included assorted Christmas greetings from a variety of firms and enterprises:

In particular, I noticed that Professor R. L. Mulveney’s Remedies sent their greetings.

And, if you were lucky enough to receive a Christmas cheque from a wealthy relative, two separate piano dealers suggested that the best way to spend the dough was on a large musical instrument:

A third piano dealer was less direct – they just wished their readers the best of health and happiness during the Christmas season.

That was an unfortunate typo to list the firm’s name as being on “Blor” Street.

Paul Hahn & Co. still exists, though they are now at 1058 Yonge. The other two firms are gone, though the Heintzman company has been reconstituted.