The city of Toronto used to hold municipal elections every year on New Year’s Day. So the December 31 1934 edition of the Toronto Daily Star was the last edition before the 1935 election.

This edition of the Daily Star made it clear who the paper was endorsing for mayor: Jimmy Simpson. Here is a collection of pro-Simpson articles that appeared there that day. 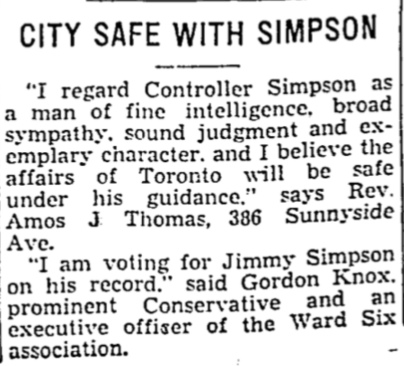 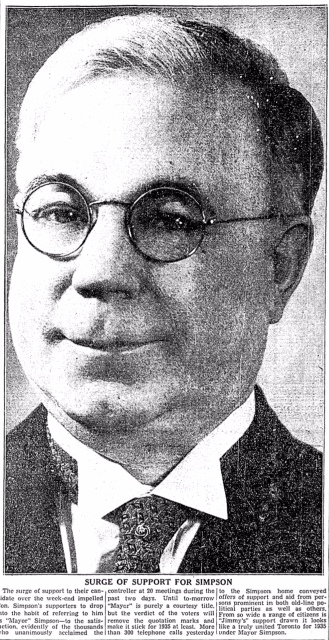 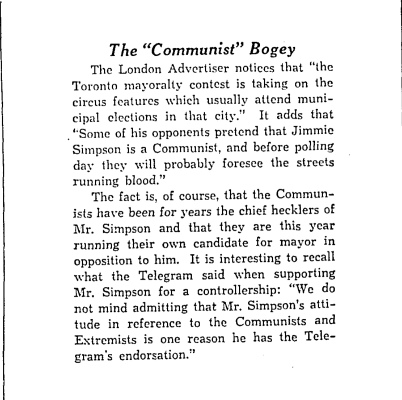 Mr. Simpson headed the list of the candidates that the Daily Star was endorsing for 1935:

However, there was one ad in the paper for a rival mayoral candidate: 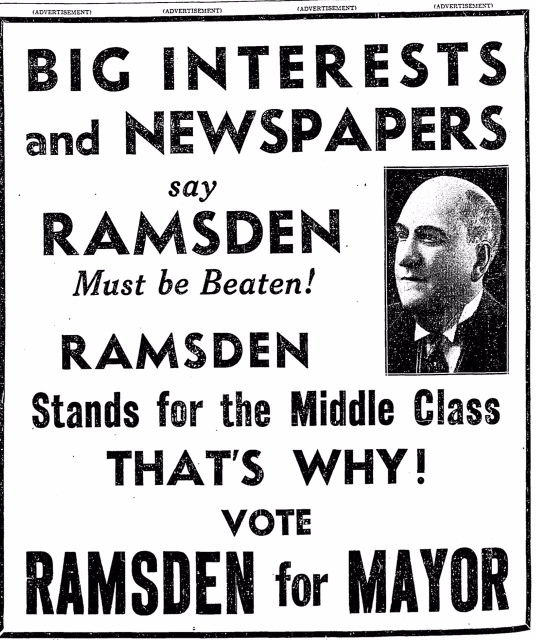 There was a page full of ads from people seeking municipal office:

And, finally, there was a burst of doggerel on the editorial page, advising people to vote for somebody: 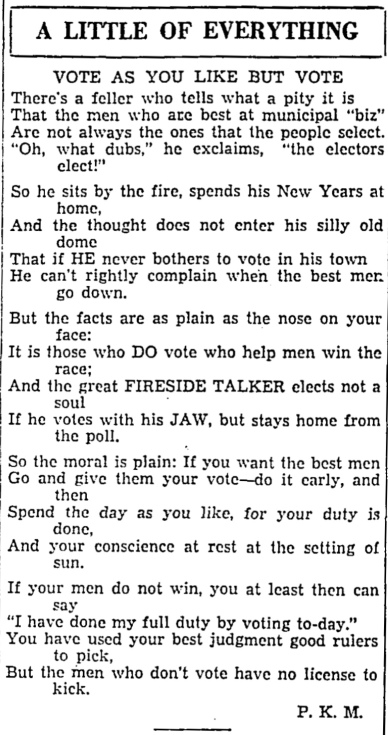 As it turned out, the Daily Star’s endorsement might have helped: Simpson won the race for mayor of Toronto in 1935 by nearly 4500 votes. The Daily Star turned on him the next year, though, when they discovered that he was anti-Catholic; he lost his bid for re-election in 1936.

In 1938, Simpson was killed when his car collided with a streetcar. In Toronto, his name lives on in the city’s east end, as a park and a recreation centre are named after him.

The October 15 1931 edition of the Toronto Daily Star contained a number of small bits of filler that were taken from a collection of maxims or life advice. Here’s the complete list.

The front page of the August 13 1952 edition of the Toronto Daily Star contained a fascinating article about a lieutenant-colonel in the Canadian Army who was left $250,000 in his aunt’s will, provided he changed his surname.

Here’s the picture of the late aunt, the home she lived in, and Lieutenant-Colonel Edward Murray Dalziel McNaughton, who was being asked to change his surname to Leslie (his aunt’s surname).

There was also an article that went into more detail.

Naturally, I was curious: did he go through with it? As it turned out, he did: there is a Wikipedia page for his son, Andrew Leslie, who was himself a lieutenant-general in the army. The page mentions that his father changed his name to obtain the inheritance. Lt. Col. McNaughton, later Leslie, became a brigadier general, so the name change didn’t hurt his career any.

The December 12 1944 edition of the Toronto Daily Star contained this ad for a New Year’s Eve event:

Naturally, I was curious: did John Sikura Real Estate become successful? Unfortunately, its fate was similar to that of this real estate agency. The company appeared for the first time in the 1958 city directory, but does not appear in the 1959 city directory.

I also looked up the men mentioned in the ad:

Cureton had been a first-team All-American and UCLA’s team captain in 1955, but he was in the CFL because he was a draft evader: had he returned to the United States, he would have been arrested. He had a good career in Canada: he won the Grey Cup as a member of the Tiger-Cats in 1963. He passed away in Richmond, Virginia, in 2003, so obviously he was eventually free to return to the land of his birth. There is a picture of him here.

The December 25 1928 edition of the Toronto Globe and Mail had a photograph of a couple who were celebrating their 55th wedding anniversary, having gotten married on Christmas Eve in 1873.

As usual, I wanted to satisfy my curiosity: for how much longer could I find them in the Toronto city directories? Here’s what I found:

163 Dovercourt Road still exists (it’s the house with the bicycle in front of it in this Google Street View photo), but it looks like it’s been refinished.

The Toronto Daily Star did not publish on Christmas Day 1928, but the Toronto Globe did.

Among other things, this edition published Christmas greetings from Eaton’s and Simpson’s:

(By the way, I still find it hard to believe that Eaton’s and Simpson’s are both long gone now – when I was young, they seemed like they had been around forever and were impregnable.)

The paper also included assorted Christmas greetings from a variety of firms and enterprises:

In particular, I noticed that Professor R. L. Mulveney’s Remedies sent their greetings.

And, if you were lucky enough to receive a Christmas cheque from a wealthy relative, two separate piano dealers suggested that the best way to spend the dough was on a large musical instrument: 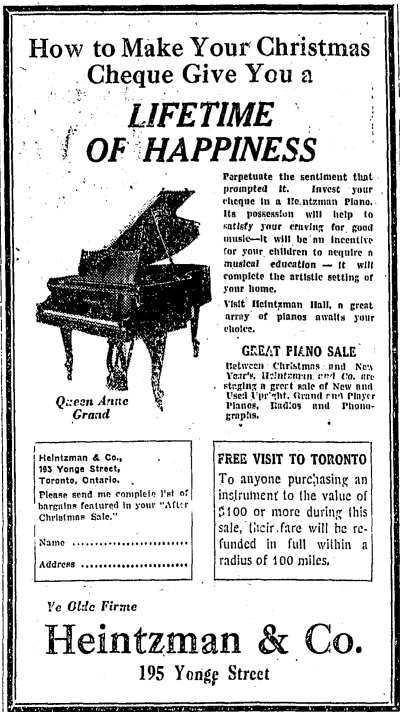 A third piano dealer was less direct – they just wished their readers the best of health and happiness during the Christmas season.

That was an unfortunate typo to list the firm’s name as being on “Blor” Street.

Paul Hahn & Co. still exists, though they are now at 1058 Yonge. The other two firms are gone, though the Heintzman company has been reconstituted.

This illustration is from the Circle Of Young Canada in the December 22 1928 Toronto Globe.

I wish all of you the very best of the holiday season. Thank you for reading these entries.

Many of the Toronto Daily Stars from the 1930s reserved one page for all their photographs, since they were harder to reproduce than they are today.

The April 18 1934 edition of the Toronto Daily Star’s photo page included a picture of the Duchess of Northumberland and her daughters: 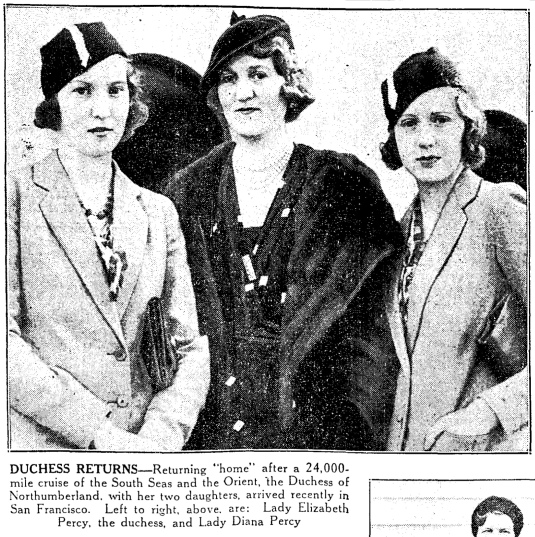 There are Wikipedia pages for Helen Percy, the Duchess of Northumberland, and her daughter Elizabeth. They didn’t do anything really exciting to write about, but they looked a lot alike.

There was also a picture of Roberta Semple Smythe, the daughter of famous evangelist Aimee Semple McPherson:

And here is boxer King Levinsky leaping over his manager, his sister Lena:

King Levinsky (1910-1991) fought most of the leading heavyweight contenders of the 1930s, but didn’t challenge for the title himself. At about the time of this photograph, he was briefly married to exotic dancer Roxana Sand; she asked for a divorce after only five weeks on the grounds of cruelty. His sister was noted for swearing like a sailor and rooting loudly for her brother during fights.

The April 18 1934 edition of the Toronto Daily Star had a human-interest story about a man who was about to turn 90 years old:

Maybe it’s just the quality of the reproduction, but that is a terrible picture of poor Mr. Cox. And the nonagenarian did not sell a wife into slavery.