The March 12 1937 edition of the Toronto Daily Star contained this ad for an optician: 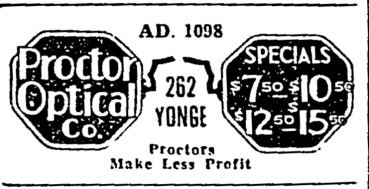 “Make Less Profit” is an unusual way to sell your business – but this was the end of the Great Depression, after all.

A search of the Toronto city directories revealed how Proctor Optical could have been able to make less profit on their glasses – the Proctors (Frank T., Homer F., and Frank N.) also operated a jewelry store at the same location. They had only recently branched out into the optical business, as the 1932 directory just listed them as jewellers.

By 1942, they were back to being just jewellers again, and they remained in business for many years. By 1957, only Homer F. and Frank N. were still around; by 1962, Frank N. was the only one left, and he had moved to 92A Yonge. (There was a Proctor’s Jewellers at 2313 Yonge run by P. H. Proctor, but I have no idea whether he was related.) I didn’t have the heart to find out whether Frank N. made it through the end of the 1960s or not.

[…] to form W. C. Knox Ltd. at that location. By 1935, this location became Proctor Optical, discussed elsewhere in this […]