In 1938, the Toronto Globe and Mail ran a regular feature called The Inquiring Reporter, in which they asked random people a question.

The July 23 1938 edition asked people what impressed them about Toronto:

And, as a counterpoint, the July 25 1938 edition asked them what they disliked about Toronto: 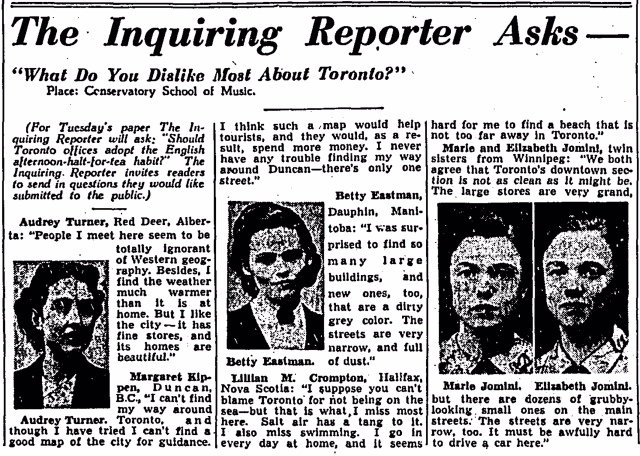 Readers seemed to like and dislike the same features:

I felt saddest for the former resident of Copper Cliff, Ontario, near Sudbury (and now part of it), who pointed out, “Around our part of the country there are few trees, and flowers don’t grow well.” At one time, thanks to mining, the Sudbury area had 20,000 hectares of barren land in which no vegetation grew, and 80,000 hectares of semi-barren land. Toronto, even at its grimiest, would have seemed like a garden paradise by comparison.

I’ve mentioned this before, but the Toronto Daily Star used to publish a poem every day on its editorial page, as the lead to its “A Little Of Everything” feature. I know very little about poetry, but the poems seem to me to vary widely in quality.

The poem that appeared in the October 16 1942 edition of the Daily Star is not one of my favourites – the central character writes with what I think is an Irish accent, and the text is somewhat melodramatic.

Since I’m a snoop, I thought I would try to look Frances Hanson up in the Toronto city directories, but I found nothing. She doesn’t appear by name in the 1941, 1942, and 1943 directories, and the listing at 368 Huron doesn’t include her. So either she was staying there for a while but was not listed as a resident, or somebody submitted this poem under a fake name and/or address. I’ll never know which.

If you’re interested in bad poetry, you’ve probably heard of William McGonagall, and you might have heard of Amanda McKittrick Ros.

The June 19 1937 edition of the Toronto Globe and Mail included this photograph of British aviator Beryl Markham: 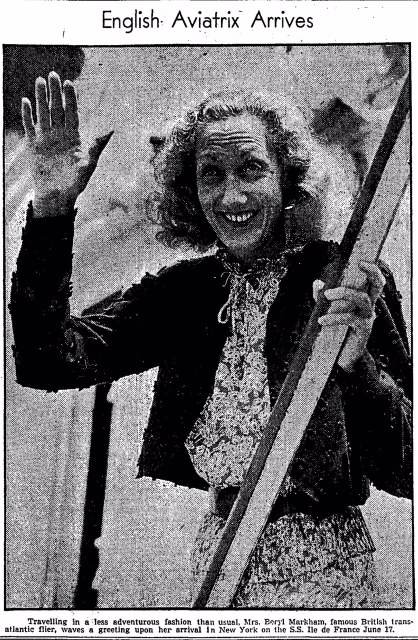 Beryl Markham (1902-1986) deserves to be thought of as famous – she was the first female pilot to fly non-stop across the Atlantic Ocean. She accomplished this on September 4, 1936, after several women had died trying.

Ms. Markham led an interesting life. Among other things:

The October 16 1942 edition of the Toronto Daily Star contained this ad:

If you were going to hire somebody to broadcast war propaganda, is there a better name than “Rex Stout”?

Rex Stout (1886-1975), whose full name was Rex Todhunter Stout, was a mystery writer who was best known for creating detective Nero Wolfe. He wrote 33 novels and 39 novellas about Wolfe and his assistant, Archie Goodwin, between 1934 and his death. The Wolfe Pack website provides more details on Wolfe and on Stout’s writing.

Between 1942 and 1943, Stout cut back on his novel writing to produce 62 broadcasts of Our Secret Weapon. His goal was to refute short-wave propaganda being broadcast by the Axis. The Library of Congress now has a complete record of the typewritten pages of the scripts of these broadcasts, transferred onto a total of 8000 feet of microfilm.

After the war, Stout was accused of being a Communist by a prominent member of the House Committee on Un-American Activities and was closely watched by J. Edgar Hoover’s FBI. This seems misplaced, as Stout was a fierce anti-Communist; he was later condemned for being too harsh on Communism and too much in favour of the Vietnam War. Some days, you just can’t win.

The March 12 1937 edition of the Toronto Daily Star contained this ad for an optician:

“Make Less Profit” is an unusual way to sell your business – but this was the end of the Great Depression, after all.

A search of the Toronto city directories revealed how Proctor Optical could have been able to make less profit on their glasses – the Proctors (Frank T., Homer F., and Frank N.) also operated a jewelry store at the same location. They had only recently branched out into the optical business, as the 1932 directory just listed them as jewellers.

By 1942, they were back to being just jewellers again, and they remained in business for many years. By 1957, only Homer F. and Frank N. were still around; by 1962, Frank N. was the only one left, and he had moved to 92A Yonge. (There was a Proctor’s Jewellers at 2313 Yonge run by P. H. Proctor, but I have no idea whether he was related.) I didn’t have the heart to find out whether Frank N. made it through the end of the 1960s or not.

Though Canada was at war in 1942, there was still time for sports and other amusements. The October 16 1942 edition of the Toronto Daily Star included this photograph of an offensive lineman:

The Ontario Rugby Football Union, abbreviated O.R.F.U., was the last amateur football league in Canada; as you can guess from the name, it was based in Ontario. During the war, after the Interprovincial Rugby Football Union suspended its league play, many military teams were formed that played in the O.R.F.U. One of these teams, the Toronto RCAF Hurricanes, won the Grey Cup in 1942, becoming the last amateur team to do so.

Bob Cosgrove has a Wikipedia entry: he played for various Toronto-based football teams in the 1940s, including the Toronto Balmy Beach Beachers (called the Balm Balm Balmies in this photo).

The February 22 1941 edition of the Toronto Globe and Mail contained this ad: 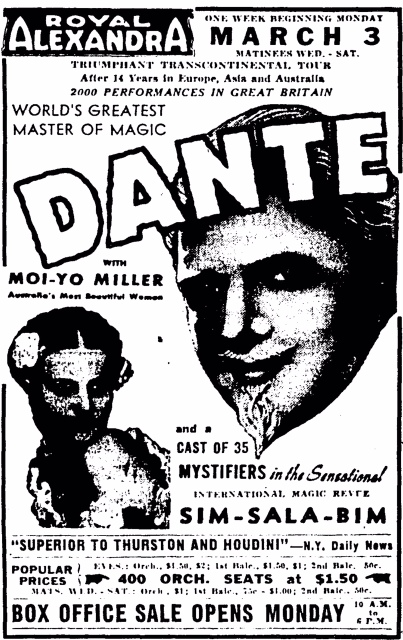 “Dante” was the stage name of Harry August Jansen (1883-1955) who first toured the world at the turn of the century before Howard Thurston hired him to star in Thurston’s #2 touring company and gave him his stage name. “Sim-Sala-Bim” is from the lyrics of a Danish children’s song; Dante used to say these words when acknowledging applause.

Dante’s career stalled when television became popular in the late 1940s; he retired to Southern California at that time.

Moi-Yo Miller (1914-2018) was the stage name of Mona Miller, an Australian who worked for years as Dante’s assistant. She was highly regarded for her magician’s assistant abilities, and once estimated that she had been “sawn in half” over 11,000 times during her career. She lived to be 104, passing away just last month.

Five years after the ads in yesterday’s blog entry, the October 16 1942 edition of the Toronto Daily Star included another round of Stetson hat ads.

As before, the first was a generic ad for Stetson hats.

Then there was an ad for L. J. Applegath and Son Limited:

As mentioned yesterday, L. J. Applegath and Son are related to Jess Applegath, who had his own hat firm, but the two firms appear to have been separate. They both lasted into the mid-1960s.

There were also ads for two firms that lasted much longer. First, an ad for Jack Fraser stores:

The Jack Fraser men’s clothing stores remained in existence until 2005.

The last ad was for Stollery’s, which was at the corner of Yonge and Bloor until very recently, when its building was replaced by a condo:

The March 12 1937 edition of the Toronto Daily Star contained three separate ads for men’s Stetson hats, which were deliberately grouped together, of course.

The first ad was an ad by the Stetson hat people themselves:

John B. Stetson (1830-1907) was the inventor of the cowboy hat. He didn’t invent any of the hat styles shown here, but his hats were popular enough that they were often named after him.

The next two ads were for places you could buy Stetson hats. Here’s one:

The firm was actually called Calhoun’s Smile Hat Shops Ltd. It was not run by a man named Calhoun – the manager was one Thomas C. Hopkins – so I have no idea what the Calhoun’s Smile reference relates to. The 97 Yonge store was the first of the two stores to open for business, and started up sometime between 1922 and 1927.

Here’s the other hat ad:

Unlike Calhoun and his smile, Jess Applegath was an actual person. However, the 1937 city directory also lists a company named L J Applegath & Son Limited, which also sold men’s hats and shoes, and had six Applegaths working for it at four locations in the city. I was curious: when did the split happen? Or were the Applegaths unrelated, which would be a monumental coincidence?

I went looking back through city directories, and found that there had been two separate Applegath hat firms going back to before the 20th century:

I guess that Jess just wanted to strike out on his own.

Both Applegath firms remained in business through at least 1962, with Jess holding on to one store at 85 Yonge and L J & Son (run by various Applegaths over time) in two or three stores at various locations. (I have no idea whether this was the original Jess or not – he would have to be quite old by now, but I don’t see evidence of two men named Jess in the directory.) By the time of Canada’s centennial in 1967, though, there was nobody named Applegath making hats in Toronto.

The Vintage Toronto group on Facebook has a photograph of the Jess Applegath store window from 1931, and the Toronto Archives Twitter feed has a photo of the L J & Son branch at 155 Yonge from 1913.

That would have been an incongruous pairing: a movie about a sultan’s harem, paired with Mickey Mouse in color.

Abdul The Damned was filmed in Britain. It is based on the life of Abdul Hamid II, known as “The Damned” for his massacres of minorities in the Ottoman Empire during his reign. The New York Times didn’t like it much, calling it a “tedious and uninspired biography, scarred by hypodermic injections of stale melodrama”. Ouch.

Nils Asther (1897-1981) was a Swedish actor who hung out a lot with his fellow Swedish expatriate, Greta Garbo. He was given a star on the Hollywood Walk Of Fame in 1960.