The March 15 1952 edition of the Toronto Daily Star featured this ad for a free book: 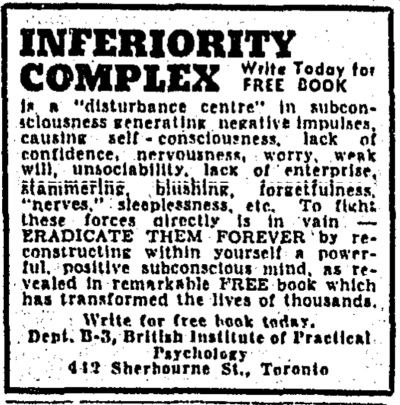 Naturally, I wanted to find out more about the British Institute of Practical Psychology. A Google search yielded this page, which discussed the history of “practical psychology” in Britain. This page describes a series of handbooks written in the 1930s and 1940s on various topics, including the inferiority complex; this book might have been one of them.

Next up, I searched the Toronto city directories. I’ve mentioned them before, but they’re wonderful – they are organized both by street and by name. The name section lists people’s names, addresses, and occupations. It’s perfect for random snooping!

When I looked up “British Institute of Practical Psychology” in the city directories, I discovered that they set up shop at their Sherbourne Street location in 1951, with E. Jay Johnson in charge. Looking up 442 Sherbourne Street and E. Jay Johnson revealed that Mr. Johnson also was in charge of two other firms at the same address, both of which were correspondence schools: the Lincoln Institute, and the National Institute of Professional Salesmanship.

Business must not have been good, because by 1955, the National Institute of Professional Salesmanship and the Lincoln Institute were no longer in existence, and E. Jay Johnson was no longer listed in the city directory. (Either that, or Mr. Johnson was no longer in existence.) The British Institute of Practical Psychology was still around, though: T. E. Boyle, who had been secretary-treasurer of the Lincoln Institute, now ran it, and it was located at 2930 Bloor Street West in Etobicoke (later listed as 2932). By 1960, though, the institute was no more.

Today is Canada Day, of course, but it used to be known as Dominion Day.

The March 19 1953 edition of the Globe and Mail reported on a Liberal MP who objected to the name Dominion Day, but was rebuffed: 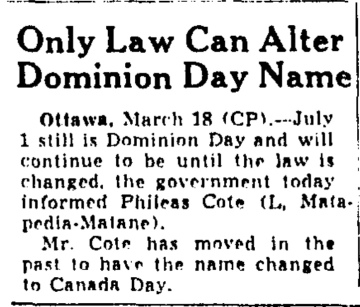 According to the Wikipedia entry on Canada Day, Mr. Côté first tried to get the name changed in 1946 in a private member’s bill. The bill was stalled in the Senate, which recommended that the name be changed to “The National Holiday Of Canada”, which was understandably rejected. He tried several times after that, and was rejected each time; the 1953 attempt might well have been his last, as he died of a heart attack in 1954 at the too-early age of 51.

By the early 1980s, many Canadians were using the term “Canada Day”, and the name was officially changed on October 27, 1982. Future prime minister Stephen Harper introduced a private member’s bill in 1996 calling for a return to the old name; it was defeated.