The September 5 1947 edition of the Toronto Daily Star featured ads for a few entertainment options for people looking for a night on the town.

The first was for Lisa Derney at the St. Regis Hotel:

The St. Regis Hotel was located at 392 Sherbourne Street. It was in existence in 1960, but was gone by 1965. A high-rise building is now at that location. The name is about to be reused for a luxury downtown hotel.

The only reference I could find for Lisa Derney was this Arthur Murray Dance Studio ad, which appeared in some major magazines in 1949. Jimmy Amaro passed away in 2004; his obituary (at least, I assume it was him) appeared in the Windsor Star. I found a reference to a Jimmy Amaro Jr., who was a jazz bassist; I assume that he was Jimmy Sr.’s son.

The second ad was for The Great Athrens at the Eaton Auditorium (now the Carlu): 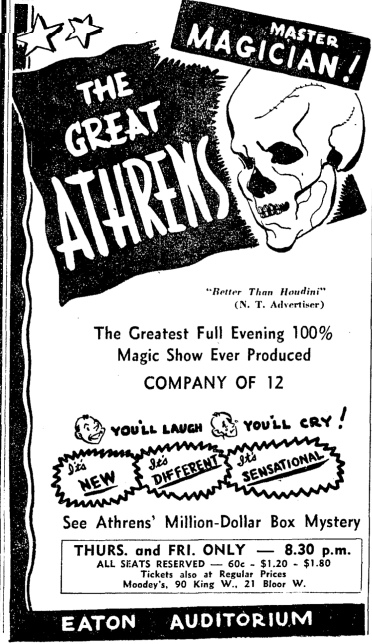 I could find nothing at all about The Great Athrens (or about the N. T. Advertiser, which claimed that he was better than Houdini).

And, finally, there was Earl Wild at Massey Hall:

Earl Wild (1915-2010) was a pianist who was best known for transcribing jazz and classical music into solo piano pieces. In 1997, he was the first pianist to stream live over the Internet.